Review of Localities, Spaces and Places

This volume focusing upon the local and regional dimension of Chartism in the Midlands and the South, is Richard Brown’s sixth excursion into Chartism, which with a sequel print volume encompassing the North of England, Scotland, Wales and Ireland, will provide an extensive and unprecedented analytical survey by a single author of Chartism from a regional and local perspective. As Chartist historian Stephen Roberts has commented such ‘a comprehensive survey of the Chartist Movement, region by region, will be of immense value to all students of Chartism’ since the intended scope of the two volumes and unified Kindle version is ‘truly astonishing’. Not since the ground-breaking collection of essays edited by Asa Briggs in 1959, which E.P. Thompson observed brought us ‘closer to the local roots of Chartism than any previous study’ and which stimulated a myriad of further local studies, has there been a more considered, in-depth, attempt to re-visit this dimension of Chartism. Indeed, since the 1980s, influenced particularly by the controversial intervention of Gareth Stedman Jones in the historiographical debate, the focus of Chartist studies shifted priorities sharply towards considerations of Chartism as a national political movement. Brown’s contention is that both dimensions remain vital to understanding this extraordinary movement. ‘Is it better’, he asks, ‘to see Chartism as a network of semi-autonomous political organisations over which national control was limited rather than a unified political movement?’ His answer is emphatically, that ‘neither one nor the other’ approach will suffice and that a combination of both approaches is now necessary to understand the full impact of this momentous movement on the history of Britain at every level. Chartism, he concedes, ‘may have been a national, political movement but it was grounded in the experience of its local activists as much, and perhaps arguably more than through grandiloquent oratory and the organisational structures of its national leaders’. 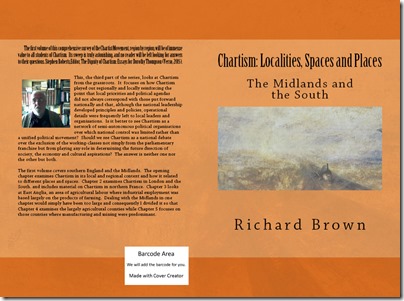 Brown engages elegantly and informatively with the historiography of local history in his opening chapter to explain how ‘local and regional considerations, linked to prevailing social and economic conditions played a major role in the ways in which the movement developed nationally’. For example, he argues that the strikes of 1842 arose ‘not from the decisions of national leaders but from the intensity of local anger and frustration at the inequities of local economic structures’. He also draws upon recent writers, notably Katrina Navickas, who have explored the significance of space and place in the development of grassroots radical politics, arguing that recognition of the centrality of space to human experience is ‘fundamental in understanding how and why Chartism developed and exchanged information and ideas within communities, localities, regional and national locations within Britain as a whole’.

Each exploration of regional and local dimensions in subsequent chapters is prefaced by an in-depth socio-economic profile of the locality presenting a rich tapestry focusing upon ‘how Chartism played out regionally and locally reinforcing the point that local priorities and political agendas did not always correspond with those put forward nationally and that, although the national leadership developed principles and policies, operational details were frequently left to local leaders and organisations’. This timely and illuminating study is a poignant and worthy tribute to the author’s wife who died shortly before this volume was completed. It will enrich understanding of Chartism as a national movement, whilst ‘drawing attention to the tensions between the aspirations of the Chartist national leadership and leadership at the local level’, thereby providing an indispensable overview to researchers seeking to understand how the Chartist movement played out in their own particular locality or region.