My appallingly bad yet typically English 'franglais' will never do justice to what is an elegantly written and much needed study of Annie Besant. Until now, we have had to rely on Anne Taylor's sound, if partial, biography published in 1991 but no longer. There is some irony in having what must now be regarded as the best available study of Besant's life written by a historian of British history in France. This reflects the lamentable ignorance of most students and many historians of the diversity of her long life and the central role that she played in developing notions of feminism between the 1870s and 1930s. Apart from her involvement in the Match Girls' strike in 1888, Annie barely figures in British consciousness. Yet, either as a direct participant or a dominating influence, she was a pervasive player in improving the status and opportunities for women through education, birth control, workers' rights, theosophy...I could go on. The Pankhursts were important and are justly feted but their role was, until 1918, largely limited to the suffrage question and geographically limited to Britain even though they travelled widely within Britain's Dominions. Annie's struggles to improve the inequalities of women was far broader and, you could argue, far more influential globally, especially in the cause of Indian independence. 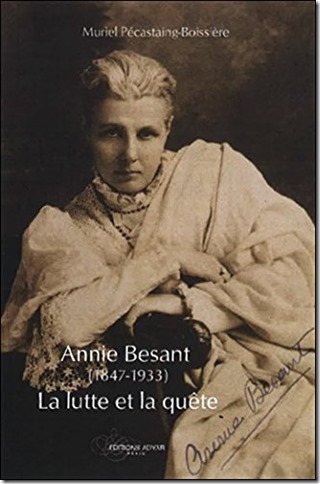 This is a book that needs to be read by those concerned with the development of feminism, radicalism and socialism, free thought and theosophy and anti-colonialism in the late nineteenth and early twentieth centuries. It provides a nuanced study of a figure whose importance in British and global history--rather like that of Sylvia Pankhurst--has been under-estimated. Well, no more.