The Red Ribbon rebellion came as a real shock for the Government. Commissioner Wright said that the license fee could now probably not be collected and the Government feared revolution. La Trobe completely failed to appreciate the depth of feeling at Bendigo especially after Wright mistakenly reported on 8 August that there was little support in the other fields. He did, however, take some precautions: troop reinforcements were sent to Bendigo; [1] commissioners were told to use minimal force in collecting fees, and future policy was discussed since the Legislative Council was due to meet at the end of August to renew the Goldfields Act. For La Trobe the problem remained the same as it had been two years earlier: if not the license fee, what alternative method was available to raise the revenue necessary to keep the colony solvent? The gold license has proved contentious because of the amount diggers had to pay and the aggressive and often corrupt ways in which it was collected. An export duty on gold would be easier and cheaper to collect but it faced opposition largely from liberal middle-class radicals and politicians who opposed any restriction on the principles of laissez faire and who formed a powerful interest in the Legislative Council. 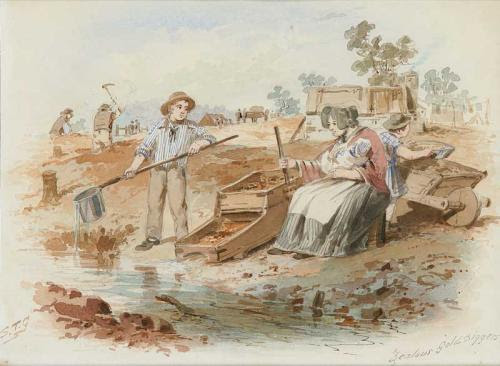 If anything La Trobe now made the situation worse. At the opening of the next session of the Legislative Council on 30 August 1853, La Trobe proposed legislation to abolish the license system and replace it with an export duty on gold, something that had been unsuccessfully proposed the previous year with a small ‘registration fee for police purposes’, that Foster later claimed would have been five shillings a year.

…the objections to the present license-fee, and the practical difficulties in the way of collecting it, have forced themselves latterly so strongly upon me that I as disposed to propose to you its total abolition…A loss of revenue to a large amount will thus be incurred which I propose to supply by a revision of the tariff including an export duty on gold… [2]

A Select Committee was set up to review the situation, the remainder of the 40th Regiment was sent to Bendigo bringing the number of troops up to 300 and reinforcements were requested from VDL.[3] Due to sheer mismanagement on La Trobe’s part, two conflicting notices were sent out to the goldfields at the same time, one advising that miners would not be required to pay a license fee for the month of September 1853 whilst a Select Committee considered the question of abolition of the fee, and a second notice stating that the fee should be paid. Even the law-abiding diggers at Castlemaine were disgusted by this crass indecision. The Argus commented tartly:

Between two documents so nearly contradicting each other, we are not surprised that the diggers stood confused and wondering. We were confused ourselves, and to this day are at a loss how to reconcile the apparent incompatibility of two such notices; how to excuse the seeming vacillation of the authorities. It is alleged, indeed, and we believe with truth, that the first notice was the result of a misunderstanding of orders on the part of Mr. Wright. That gentleman, it is well known, we have always held to be unfit for his present important office; and the misconception of an order in critical times only forms one portion of a very inglorious and unsatisfactory career. Under such circumstances, however, our own position became a difficult one. We had strongly advised the miners to obey the law…but in the midst of such vacillation, loyalty the most zealous, obedience the most implicit, are puzzled and at a loss. We will rally round the Government if we can, but it is difficult to rally round a Will-o-the-wisp…we feel that we are asked to stand upon a quicksand… [4]

Within a few days, the Council adopted its Select Committee’s proposal that as a temporary solution only a £2 fee should be paid by diggers for three months beginning in September. Although the majority in favour of this was substantial, nearly all the squatter representatives called for the diggers to be tried for treason and for military intervention to make them pay. Common sense prevailed with the Government claiming that it was trying to put the law on a sound, agreed basis and that it would be criminal to shed blood in defence of a law that most agreed needed changing. In many respects, this represented a provisional victory for the diggers: a substantial reduction in the license fee and a reconsideration of the system was as much as most hoped for as a first step. This all reflected very badly on La Trobe. He had not taken the lead in discussion on the license fee in the Legislative Council, had vacillated from his publicly stated position of replacing the fee with an export tax, and had been successful only in perpetuating the poor impression of his administration in the eyes of the colonists, the press and the Colonial Office.

In September and October 1853, the Select Committee re-examined the license system. For the first time, leading Victorian politicians heard the diggers’ case from their own representatives. [5] Owens, Jones and Thomson put forward their case to considerable effect detailing the violence, corruption and drunkenness of the police. Jones gave lucid reasons why the diggers distrusted the Council producing angry reactions from some of the committee. It was, however, Thomson who best represented the opinion of most digger leaders when he recommended the replacement of the license fee by an export duty. The Bendigo committee produced a compromise proposal that a monthly 10 shillings license fee and a duty of 2/6d per ounce would be reasonable. [6] It is difficult to understand why the diggers, who were in a strong position, failed to press home their advantage. Serle saw this as political inexperience and, given La Trobe’s statement on 30 August calling for the abolition of the license fee and the strength of feeling in Bendigo, it is surprising that the diggers were prepared to accept the compromise suggested by Thomson leaving the license fee in place. [7] The retention of a small license fee would make it easier to give the vote to diggers as occupants of Crown Land and for some diggers the issue was not the license fee per se but its level.

Both the Select Committee and the Legislative Council were extensively lobbied by the Melbourne Chamber of Commerce that was implacably opposed to an export duty, maintaining the position it had taken the previous year. There was overwhelming evidence against the license fee but, with the possible exception of Foster, there was no support for its abolition in either the Committee or the Council. The Committee concluded against the wishes of the government that, despite the defects of the system, its retention was the best practical means of ensuring social order and maintaining the rights of public and private property. It proposed a sliding scale for licenses with £1 for a month, £2 for three months and £5 for a year with those taking out annual licenses getting the vote. It also recommended that diggers should be allowed to cultivate waste land on the fields as vegetable plots, that farming land nearby be sold, and that the same licensing laws as elsewhere be applied to the gold fields.[8]

On 9 November, the same day that La Trobe’s Gold Export Duty Bill was introduced, Stawell introduced the Gold Fields’ Better Management Bill incorporating the Select Committee’s recommendations and Export Duty Bill was withdrawn. [9] The legislation imposed new license fees on miners increasing the annual license recommended at £5 by the committee to £8. It was only later realised that this range of fees made it difficult to enfranchise miners under the new constitution since only those who could afford the new annual license and who had six months residence could vote. Few took out an annual license and since they were only valid in one district, there was no financial incentive to do so as diggers tended to move from field to field in search of the ‘big strike’. This suggests that neither the Government nor the Council were serious about enfranchising the diggers; had this been the case then they could have adopted a cheaper annual license. It was the Legislative Council not La Trobe that blocked attempts to abolish the license fee and this provoked further tension on the gold fields and growing fears of rebellion.

[1] The Courier, 1 September 1853, p. 2, reported that 100 constables and 100 soldiers under Major Leslie had left Melbourne for Bendigo on 29 August and were joined on their journey by 50 mounted troops of the 40th Regiment.

[3] The management of the gold-fields and the establishment of the Select Committee was debated on 31 August, ‘Legislative Council’, Argus, 1 September 1853, p. 4.