British Society 1780-1945 consists of five books that seek to explain the major social developments that occurred during the late-eighteenth, and nineteenth centuries and, unlike the first edition of this series, extends into the first half of the twentieth century. 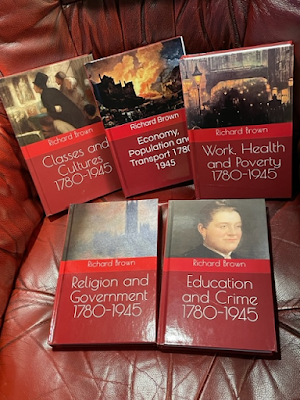 British Society 1780-1945 consists of five volumes:
Volume 1: Economy, Population and Transport
Volume 2: Classes and Cultures
Volume 3: Work, Health and Poverty
Volume 4: Education and Crime
Volume 5: Religion and Government
These are available in hardback, paperback and as a Kindle.
Posted by Richard Brown at 07:35 No comments:

The popular image of Victorian England is of a society whose members travelled by train.  While there is little doubt of the massive impact that railways had on British society, its landscapes and its attitudes, up to 1914 for most people most of the time the railways were not the main means of transport. Britain in the late-eighteenth and nineteenth centuries has justifiably been called ‘a horse drawn society’:

Railways paraded the power of the machine across the whole country, they eroded localism and removed barriers to mobility and they created new jobs and new towns.  Their very modernity and success in generating new traffic, however, also generated expansion in older forms of transport, for all the feeder services bringing freight and passengers to the railway stations were horse-drawn.  This, coupled with the needs of road transport within the larger towns, produced a three or fourfold increase in horse-drawn traffic on Victorian roads.  The result, in employment terms, was that there were consistently more than twice as many road transport workers as there were railwaymen until after 1891 and that in the early twentieth century the road transport men, by now including some handling electric trams and soon to include others on motor vehicles, remained easily the largest group of transport workers.[1]

In early 1830, twenty-nine coaches operated daily between Liverpool and Manchester; by early 1831, there were four and only one remained two years later.  One of the leading coach owners considered ‘annihilation’ as the most appropriate word to describe the effects of railways. But this experience was untypical of other parts of the country.  Where the new railways ran roughly parallel to long-established trunk roads there was certainly little future for stage coaching. Where roads traversed or fed into the route of the railway a very different situation existed and horse-drawn vehicles still played a very important part in the overall provision of transport services.[2]

Initially the effect of railways on towns that had previously been important staging posts was disastrous. In 1839, Doncaster found work for 7 four-horse coaches, 20 two-horse coaches, 9 stage wagons and 100 post horses; the total horse population was 258.[3]  In 1845, after the town had had railway links for five years, only one four-horse coach, 3 stage wagons and 12 post horses were still in service and the number of horses had fallen to 60.  Trade had suffered badly and the value of property had fallen between 25 and 30 per cent. Where coaches acted as ‘feeders’ there were still opportunities for them to stay on the road and, in some cases, increase their business. The completion of the early network by about 1840 provided many opportunities for opening up new combined coach and railway routes for passenger traffic.  In April 1839, the well-known coach magnate George Sherman expressed the opinion that after the railway had driven most of the coaches off the long-distance routes:

...there would be as much to employ more horses as there ever was through the extra ordinary quantity of omnibuses and cabs that were appearing on the streets.[4]

There was not only a dearth, but an absolute famine of locomotion, and never since the days of Charles II, when Hackney-coaches were first invented, have the sight-seeing and outgoing public been reduced to such an extremity of helplessness as by the cabmen’s strike of yesterday.[5]

The result was a significant increase in the cost of horses: in 1872 the London and South Western were paying £54 17s for the same type of animal that had only cost them £44 10s five years earlier.[6]  The increased demand for horses was certainly not confined to London; there is also significant evidence from the provinces.  There was also an increase in privately owned heavy carriages: from 30,000 in 1840 the number grew to 120,000 by 1870.  Over the same period the number of light two-wheeled carriages increased six times.  By 1902, 12 out of every 1,000 people in Great Britain owned some kind of private horse-drawn vehicles. This compared with 14 per 1000 in 1870 and 4 per 1000 in 1840, and it was not until 1926 that the number of car owners exceeded the number of persons who had owned horse-drawn carriages in 1870.

Without carriages and carts the railways would have been like stranded whales, giants unable to use their strength, for these were the only means of getting people and goods right to the doors of houses, where they wanted to be.[7]

The number of horses and the need to do something with the bodily waste they produced created major environmental problems in towns and especially the burgeoning cities. By the 1890s, when 300,000 horses lived in London, each producing 10kg of dung a day, the stuff was piled so high that streets became impassable. The result was the creation of a new job, the crossing-sweepers who made a living clearing a path for pedestrians.  Contemporaries described horse droppings coating the roads in a 'warm brown matting' that flung up dust in all directions or, on wet days, flooded the streets in a pea-soup-thick sheet that was spattered by passing vehicles across houses, shopfronts and pedestrians.  As cities reached 'peak horse', streets became gridlocked and the clatter of horses and carriage wheels became so deafening that straw was laid outside homes and hospitals to muffle the noise.

The solution to all this pollution and congestion, it was hoped, was the car. Use of the steam engine began to make the horse redundant in farm work though pit ponies continued to be used in coal mining.  The number of working horses had already declined before the war. Horse-drawn buses disappeared in the late 1880s initially replaced by trams.  Motor buses appeared in 1898 and there were 5,000 by 1904 and 50,000 ten years later.  Electric and then petrol-powered metered taxis were introduced in London from the mid-1890s. The war devastated the taxi trade with many horses requisitioned by the military.

Although machine gun and artillery fire reduced their value on the battlefield, horses remained an important part of the war effort.[8]  In 1914, the British army had about 25,000 horses but this had increased by June 1917 to 591,000 horses and 213,000 mules as well as 60,000 camels and oxen. They were mainly used for logistical support and were better than mechanised vehicles at travelling through deep mud and over rough terrain. Horses were also used for reconnaissance and for carrying messengers, as well as pulling artillery, ambulances and supply wagons.  On average, Britain lost about 15 per cent of its animals each year of the war with losses at 17 per cent on the Western Front. The war had a devastating effect on the British horse population; Britain lost over 484,000 horses, one horse for every two men. With some breeds in danger of disappearing, after 1918 working horses were an increasingly rare part of the British economy, their role confined largely to recreational purposes.

Posted by Richard Brown at 11:47 No comments: