The Whig Government could not disclaim responsibility for the actions of the Emigration Committee but it had no mechanism in place before 1836 through which to exercise control. The services of the London Emigration Committee were dispensed with at the end of 1836 and responsibility for the operation of the government system taken by T. F. Eliot as Agent-General for Emigration. His work coexisted with the bounty scheme devised in 1835 by the Government of NSW, to encourage the immigration of skilled agricultural workers as well as unmarried women and mechanics.[1] The colonial bounty system to aid potential immigrants came into being in 1837 and was revised in 1840. [2] It granted financial aid under certain conditions to persons bringing into New South Wakes from the Britain and Ireland agricultural labourers, shepherds, tradesmen, female domestics and farm servants.

The sum of £38 would be paid as a bounty for any married man, of the above description, and his wife, neither of whose ages on embarkation to exceed 40 years; £5 for each child between 1 and 7 years; £10 for each child between 7 and 15 years and £15 for each above 15 years; £19 would be allowed for every unmarried female domestic or farm servant not below 15 nor above 30 years, coming out under the protection of a married couple as part of a family. 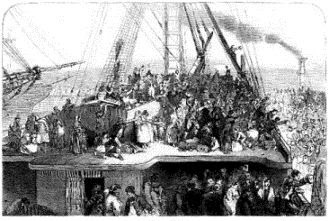 This proved cheaper than the government’s scheme by between 30 and 50 per cent. Although over 13,000 emigrants had been sent to NSW under the government scheme, there were increasing demands for its abolition. In September 1840, the Colonial Land and Emigration Commissioners, who had superseded the Agent-General for Emigration earlier in the year, sought to justify the government scheme suggesting that the cost of the bounty scheme would increase but this did little to dampen colonial criticism.

There were two main reasons for colonial complaint that were evident in the colonial press and in the despatches send by Sir George Gipps. First, emigrants were chosen more with the aim of reducing Britain’s pauper population than supplying NSW with able labourers. This argument was reinforced by the close links between the Agent-General and the Poor Law Commission and their close collaboration in the management of assisted emigration. This criticism was especially directed at the Irish who were regarded as being entirely unsuited to the needs of the colonists and the colonial press maintained that the interests of the colony were being ‘thrown overboard to promote the Irish poor laws’.[3] Secondly, the occupations of immigrants were inappropriate for work in the colonies leading to some trades being overcrowded while others, especially in the country districts, were being restricted because of the lack of suitable labourers.

Increased pressure for reform was helped by the appointment of Lord John Russell to the Colonial Office in 1839 and resulted in the creation of the Colonial Land and Emigration Commission in January 1840 with responsibility for land and emigration across the Empire centralised in one body. This sought, not altogether successfully, to resolve the tensions between Britain’s and Ireland’s desire to reduce its surplus population and supply the colonies with efficient labourers. For the next three years, the bounty system coexisted with the activities of the Land and Emigration Commission but divided control failed to deliver the necessary labour to the colonies and in mid-1842 the NSW government recommended that the bounty system should be abandoned. Faced with a mounting depression from 1842, the NSW Committee on Immigration argued that too many immigrants since 1839 had been artisans and not agricultural labourers who might have reduced the labour scarcity and the consequent high wages.

Slightly over half of all United Kingdom assisted immigrants between 1837 and 1850 came from Ireland and, though small in comparison with the flood to the United States, proved to be of major importance for Australia.[4] By 1846, a quarter of NSW’s population was Irish-born. The Irish already in Australia were very adept at using free or assisted passage schemes to help their siblings and neighbours. In certain areas, whole villages were transplanted from Ireland, or sections of a town or city would be almost exclusively Irish. Although there were tensions between them and immigrants from Britain, Irish immigrants had little difficulty finding employment and were soon merged into the colonial population. They did not avoid agricultural districts. The heaviest concentrations of Irish settlers were found neither in the cities nor the outback, but in relatively populous regions surrounding major towns. As one hostile observer wrote

The Irish do not like going into the interior; but like to hold together like cattle, where they can squat down and gossip about all the ins and outs of the neighbourhood and have their priests and chapel in sight. An Irishman out here for twelve months knows more of the history of the people than an Englishman in seven years.

Until 1850, pastoralism dominated the Australian economy and, though not insignificant, industrial and urban growth lagged behind.[5] The major class realignments that occurred in the industrialising United States were absent but there were important colonial divisions between the ex-convicts or emancipists and the exclusives who had come to the colony as free men. The critical question was one of civil status: should emancipists have the same civil and legal rights as exclusives? The Irish-born came from both sides of this social divide, though more were emancipists than exclusives. The result was a campaign to ensure that emancipists could sit on the newly formed district councils and the defeat of proposals to include civil status in the 1841 census. What characterised this campaign was its bipartisan nature with Catholic and Protestant reformers working together in a common interest. 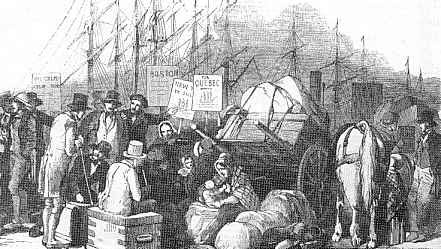 Religion proved the other major division in colonial life. The Church of England maintained a savage attack on the practice of Roman Catholicism from the early years of penal settlement. However, the its hope for exclusivity was ended by Catholic Emancipation in 1829 and following the removal of civil disabilities on Roman Catholics, two Irish Catholics[6] were appointed to important positions in NSW that coincided with the appointment of Richard Bourke, an Irish liberal Protestant, as governor. In 1836, the Church Act provided state assistance to all religious denominations relative to the number of adherents effectively ending any monopolistic ambitions of the Church of England. Bourke was anxious that the sectarian divisions of Ireland should not be replicated in Australia and the legislation successfully established state disinterest in doctrinal matters that proved resilient throughout the nineteenth century. Even John Dunmore Lang, a Scottish Presbyterianism whose early life instilled antagonism to Irish immigration and the Roman Catholic Church, could defend the civil and religious liberties of Roman Catholics already settled in Australia as British subjects in the 1840s while at the same time agitating strongly against further Irish immigration to the colony. In addition, there was no evangelical movement in Australia that paralleled the strength of the American revival. This is not to say that religion was unimportant and by the end of the 1840s there was a visible increase in religious consciousness through it never generated the same level of religious bigotry as in the United States.[7]

In general, the Irish in Australia were well dispersed and seldom without non-Irish neighbours to gossip about. Even within the cities, Irish ghettoes never developed: as another witness pointed out, ‘Melbourne is far too Irish as a whole to have any special ‘Irish quarter’. The Irish-born were no longer inevitably marked as outsiders but were contained within the colonial mainstream. Unlike in America and Britain, the Irish immigrants shared in the development of the country in ways that they did not in America and on the mainland. Bourke’s religious liberalism meant that the Australian environment was beneficial to many Irish immigrants and there were few divisive issues that set them apart from their fellow colonists.

[6] Roger Thierry was appointed commissioner of the court of requests in 1829 and John Plunkett as attorney-general three years later.