I have read with interest the speech Ed Miliband made today as part of what he sees as ‘the most important election for a generation’…presumably he means since 1997.  Lets deal with the ‘let those who are without sin…’ points first.  He says he is serious about dealing with environmental issues and that climate change would be at the centre of his agenda…well he couldn’t really say I don’t give a damn about climate change could he?  Of course it’s going to be at a heart of his agenda though what that actually means in practice is unclear.  He also said that vocational and academic qualifications would be valued ‘equally’ by his party.  I’ve been hearing this for thirty years by a succession of party leaders, ministers and MPs and the reality for most people is that academic qualifications are still regarded as superior to vocational ones.  I’d like to know how he intended to achieve this. 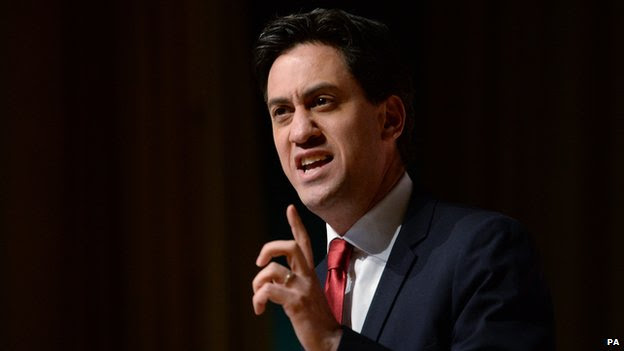 Let’s move on to more substantive issues.  The minimum wage would rise to more than £8 an hour under Labour.  It’s currently £6.50 and will rise before the election.  In effect, what he is saying is that by 2020, it will go up by less than £1.50…that’s 30p a year…so much for a ‘living wage’!  As far as immigration is concerned—you know the subject Labour candidates have been advised not to talk about on the doorstep—there’s really little to distinguish Labour from the other parties, UKIP apart.  Immigration, he says, makes the UK ‘stronger, richer and more powerful’ but those who enter the country should ‘play by the rules ‘and ‘contribute before they claim’.  Talk about vacuous generalisation!  He also believes that the A & E crisis would be solved by improving community health services.  So having introduced the GP contract that effectively made it a five day, 9-6 service, Labour is going to do what?  Given that two GPs failed to recognise that my wife had pneumonia—hardly a difficult illness to identify--something A & E picked up immediately, can we really have confidence that GPs can fulfil the same or similar functions as A & E?  Yes too many people go to A & E for trivial reasons or are there because of their own, often drunken, stupidity, but are Labour planning to introduce a 24/7 National Health Service rather than what is in effect a Monday to Friday service?

As for people ‘chocking on their cornflakes’ after David Cameron urged firms to use windfalls from cheaper fuel to fund pay rises, that seems to me to be a perfectly reasonable position to take.  Yes, wage increases have either been non-existent or extremely low over the past five years and I’m afraid I don’t think that this was any more than a practical position for those in both public and private sectors to take—though poorly managed when executives were getting high levels of remuneration giving a lie to George Osborne’s ‘we’re all in this together’.  In a recession everyone suffers or should suffer and people are worse off today than they were in 2010 but was there an alternative?  The Ed Balls’ solution would simply have increased borrowing and would have done little for the private sector that would have effectively cut wages to survive.  With their argument about a cost of living crisis shot, Labour now appears to be saying the economic success and a concomitant improvement in wages is an attempt to ‘wipe away five years of failure’.  Well it’s coming up to an election, what else did he expect!

I’m hardly a supporter of the Conservatives, but is this really the best that Ed can do?