The problematic nature of public monuments to the rebellions in Upper Canada can be seen in the Clifton Gate Memorial Arch at Niagara Falls that commemorated the inception of responsible government following the rebellion of 1837.  The memorial arch was the idea of Thomas Baker McQuesten, Minister of Highways and Public Works in Mitchell Hepburn’s Ontario government during the 1930s and part of an elaborate and expensive scheme to develop the Canadian side of the Niagara River. Historic reconstructions, formal gardens, a memorial arch and an open-air theatre were built along a thirty mile scenic parkway that overlooked the gorge carved by the powerful falls. The gardens, arch and theatre were designed in the ‘Canadian Style’ of architecture, promoted by a group of Toronto-based architects and landscape architects between the two world wars.  McQuesten’s view of Canada focused on the predominantly British heritage of southern Ontario but even more specifically on the interaction of America and Canada along the international border.  Indeed, all his restored or memorialised sites dealt with armed confrontation between Americans and British or Canadian soldiers. 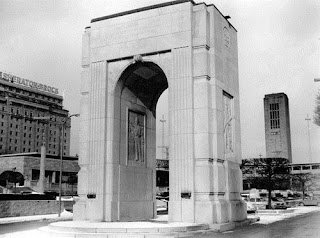 The completed arch was meant to serve a dual purpose. First, it was intended to commemorate the one hundredth anniversary of responsible government in Canada by honouring those who had pioneered and settled the country and to remind the present generation of the pride they should have in their nation’s history. It highlighted the ethnic roots of Canada from its French origins, the immigration of Loyalists from the United States after the American Revolution and the multi-ethnic defence of the colony during the War of 1812.  Secondly, the Arch was built to provide an impressive entrance to Queen Victoria Park for visitors entering Canada over the Upper Steel Arch Bridge which was known locally as the Falls View Bridge.   Tourism, both Canadian and American, would help to invigorate the otherwise stagnant Depression economy, but McQuesten was also motivated by his desire to promote Canada as a civilised, cultured nation abroad. Americans could cross the border at Niagara over the Upper Steel Arch Bridge until it collapsed in 1938 and was replaced by the Rainbow Bridge that was constructed some distance north of the both the old bridge and the Arch. The architect William Lyon Somerville prepared the design that had an Egyptian motif with a tapered top. The arch contained four large narrative relief panels designed by C.W. Jefferys, an artist known for his illustrations of Canadian history and were carved by the accomplished sculptor Emanuel Hahn.

The earliest event commemorated was the discovery of the Falls in 1679 by Rene Robert Cavelier, Sieur de La Salle and Pére Louis Hennepin. This panel was on the west side of the arch below a medallion of La Salle’s ship, the Griffin. A second panel, on one side of the inside of the arch, commemorated the arrival of the United Empire Loyalists after the American Revolution. A weary mother holding a baby rides in a cart full of the family’s possessions and pulled by the family’s pair of oxen. The father, anxiously gripping his rifle, and the two sons, armed with pike and axe, vigilantly escort the cart through hostile American territory. The third panel celebrated the War of 1812 highlighting the British, Canadian and Indian (something McQuesten thought had been neglected) heritage of the colony.  A British soldier stood with a musket across his chest while an Indian (we know from McQuesten’s correspondence that it is Tecumseh) waited in anticipation, his rifle at the ready. A Canadian farmer militiaman brought up the rear with his pistol drawn.  A relief medallion, matching that of the Griffin, was located above the War of 1812 panel and showed the St. Lawrence, the flagship of the British naval forces and the largest vessel sailing the Great Lakes at the time. The fourth panel remembered William Lyon Mackenzie and the Rebellion of 1837.  Facing the Falls on the south side of the Arch above the opening of the Arch, verse three of the 93rd Psalm was inscribed: ‘The floods have lifted up, O Lord, the floods have lifted up their voice’, referring to the surging waters thundering in the background.  Below the panels was an inscription:

This Memorial was erected to honour the memory of the men and women in this land throughout their generations, who braved the wilderness, maintained the settlements, performed the common tasks, without praise or glory and were the pioneers of political freedom and a system of responsible government which became the cornerstone of the British Commonwealth of Nations.

McQuesten’s depiction of Canadian history was not simply an opposition of the British against the Americans with twentieth-century Canada as a product. His was a decidedly Whig version. One of the recurring themes in the reconstructions and commemorative plaques is the Rebellion of 1837. Mackenzie’s stone house at Queenston, where he began publication of his controversial Colonial Advocate, was restored in 1936 by Somerville for McQuesten and the Clifton Gate Memorial Arch was dedicated to those who died in the Rebellion, alleged victims of the fight for ‘responsible government’. The panel on the arch depicting Mackenzie shows him delivering his Seventh Report, in which he outlined to the Upper Canada House of Assembly the grievances Canadians had experienced under the ‘Family Compact.’ In all, thirty-two men, primarily labourers and farmers, were hanged by the two colonial governments in 1838 and 1839. The names of these men were inscribed below the Mackenzie panel on the memorial arch between two medallions carved with profiles of the Toronto ‘martyrs’ of the Rebellion, Samuel Lount and Peter Matthews.

In January 1937 McQuesten discussed the design with Prime Minister William Lyon Mackenzie King, the Little Rebel’s grandson. King’s diary shows the extent to which he was aware of the rebellions.  There are many references to it and his grandfather dating from 1914 to 1950.  King was asked to recommend suitable Biblical inscriptions, and in a lengthy letter suggested over a dozen. King cautioned McQuesten about over-emphasising the rebellion noting in his diary on 13 January 1938. ‘I question in my mind the wisdom of associating responsible government too closely with the incident of the rebellion, since the real struggle had been going on years before...’  The Prime Minister also suggested including along with the names of rebels who had been killed in battle or executed, the names of those whose ‘lives were lost upholding the Crown. They too were doing their duty as they believed it should be done, in support of King and country.’ McQuesten used some of King’s suggestions, but stuck largely to his original plans.  By April 1938, construction had reached the point when a date could be set for the unveiling of the monument and two dates in June were suggested to King.   Like McQuesten, King was passionate about landscape gardening and history, particularly his own. In his diary on 22 April he noted, ‘accepted today an invitation to unveil the memorial arch at Niagara last weekend in June, a significant fulfilment of God’s Holy will.’

The dedication ceremonies took place in the Oakes Garden Theatre that had been formally opened the previous September. King noted in his diary that on Saturday, 18 June 1938, seven thousand citizens looked on as he rose to unveil the Arch covered in red, white and blue bunting that fell away after King pushed a small electric switch. King was not a great orator but, on this occasion, he delivered to the assembled throng an ‘inspiring message.’  The Evening Telegram reported that King said that he Arch was more than a memorial to ‘a few rebels,’ for the rebellion was ‘a mere incident in the history of Canada.’ Rather ‘the Arch was a symbol of triumph’ epitomising ‘the conquest of ideas and ideals. As I look at the Arch, it seems to me one can see the great pilgrimage of men and women going back three centuries who have left us the country we have today.’

As the Prime Minister carefully scrutinised the panels, his eye was attracted to something to which he took immediate exception.  Whether he expressed his concerns to the Commission Chairman is not known, but he considered the matter for many months before deciding to talk to the historian Edwin Guillet during the winter of 1938-1939.  On one of the panels were thirty-two names of men who had been executed following the rebellions in 1837 and 1838. The list included Samuel Lount and Peter Matthews hanged in April 1838 for their part in his grandfather’s rebellion the previous December but King’s disquiet was caused by the presence on the panels of the names of several American border raiders. King believed these members of the Hunter organisation had attempted to turn a local rebellion into a replay of their own revolution.  While the rebellion in December 1837 had been a wholly Canadian affair, the shambolic border raids in 1838 in support of Canadian exiles were largely American.  Their invasion, much as during the War of 1812, has been repulsed.  For King, their actions were criminal not patriotic.  It is not surprising that he and Edwin Guillet strongly objected to their presence on the panels arguing that their inclusion detracted completely from the noble purpose of the Canadian rebellions. Guillet readily agreed to support the Prime Minister’s objections and he later publicly criticised their presence. However, as Guillet subsequently complained, ‘the inscription has not been altered.’  Nothing was done until twenty-eight years later during Canada’s Centennial Year, when a decision was made to demolish the arch during the latter part of 1967.  The increasing growth of cars on River Road meant that the Arch was obstructing traffic and had become more hazardous than historical.