Unlike the United States and Britain, Australia did not receive a great flood of immigrants following the Great Famine. ‘Fast relief was necessary and Australia’s colonies offered no analgesic to the famine’s distress.’[1] The famine emigration came too early for Australia to benefit. She was too young, too small, and too far away. This did not prevent their arrival proving high contentious, a consequence in part of the depressed nature of the Australian economy from the early 1840s. ‘As a group, Irish migrants to Australia were far from well-off financially, but they were not refugees from the Famine’.[2] In 1846 the second year of the Famine in Ireland, the government of NSW conducted a census that revealed that among the foreign born, virtually all from England, Scotland and Ireland, Irish immigrants were an astonishing 38 per cent. More than half of these colonial Irish were recent arrivals nearly 26,000 reaching Australia between 1839 and 1845 as free immigrants. Never again, for the great ‘gold rush’ immigration was soon to hit eastern Australia, would the Irish form such a high proportion of Australia’s population. NSW had a distinctly Irish character during the years of the Great Famine.[3]

One of the predictable consequences of famines is that they tend to be associated with increased crime. Ireland during the Great Famine was no exception. Using the indictment returns of the Inspector of Prisons, Wilson showed that the number of crimes increased from an annual average of 19,000 between 1842 and 1846 to 31,000 between 1847 and 1850.[4] The outrage returns tell a similar story. Between 1842 and 1845, they averaged 6,700, but between 1846 and 1850, the number increased to more than 13,000. Although a good deal has been written about Irish crime, surprisingly little of it is about how crime changed during the Famine. [5] Hunger-related crimes are thought to have increased in relative importance, as well as disputes over employment and land tenure, increasing the proportion of protest crimes. It also seems possible that the Famine would have pulled into criminal activity many people who would not normally have been involved, such as women and older people. Sixteen ships arrived with convicts from Britain and Ireland in Van Diemen’s Land between 1843 and 1847 but there were thirty between 1848 and 1850.

What happened in Ireland during the terrible years between 1845 and 1850 had a big impact in Australia. Proportionately, the impact was perhaps greater than in North America, although the overall numbers are very small by comparison. Between 1848 and 1850, more than 10,000 Irish immigrants arrived in Sydney, Port Phillip and Moreton Bay directly from scenes in Ireland of starvation, dislocation and widespread emigration. Few of the Irish born who lived in Australia would have been untouched by the first-hand stories from home brought by these new arrivals. Anxiety for relatives at home would have been widespread. This resulted in collections being made throughout Australia for famine relief. The Sydney Herald reported that over one week more than £600 had been collected in Sydney and how much the situation in Ireland was bringing out the best in the city’s inhabitants[6]

However widely they may have differed upon other matters, each one has vied with his neighbour in contributing towards this good object, and the large subscription which has been raised in so short a time redounds much to the honour of the Colony, and will, no doubt, be duly appreciated at home.

Newspapers published long lists of subscribers to public causes and during early October, Sir Charles Augustus Fitzroy, Governor of NSW led the donations with a gift of £10, followed by £5 each from the Colonial Secretary, Edward Deas Thomson, married to the daughter of earlier Irish governor, Sir Richard Bourke, and the famous politician and later framer of the NSW constitution of the mid 1850s, Sir William Charles Wentworth of Vaucluse House. William’s father was Darcy Wentworth from County Armagh, given the option of transportation or self exile in 1790 by a London judge for highway robbery. While Irish names are prominent in the lists for donations of between £1 and a few pence, ‘sundry small sums, the Herald called them, there were many others personally moved by Irish distress. Mr Birnstingel, a Jewish jeweller, gave a pound and three pounds was subscribed by the government employees at the Barracks, then still a convict establishment. Other donors were described as ‘A Friend’, ‘A Liberal Protestant’, ‘26 labourers in the blue metal quarry’ and 2 shillings and sixpence from Mundahalay, an Aborigine living in Braidwood. 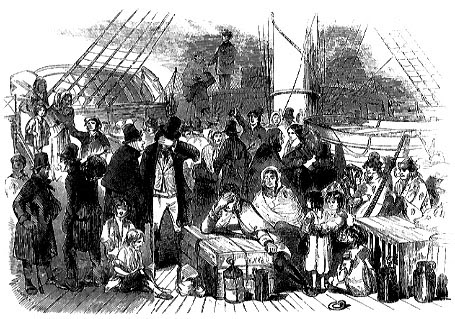 Sydney’s Catholic paper, The Sydney Chronicle, also reported that a mechanism had been set up to allow local people to remit small sums in safety to their relatives in Ireland. Emigrants who had already settled abroad and managed to save, were able to send home money to enable other members of their family to join them. One local who certainly did this was Peter Reilly, a builder, from South Head Road. In a letter written in September 1846 to his mother and his brother accompanying the money, and later published by Caroline Chisholm in her book Emigration and Transportation Relatively Considered,[7] Peter referred to the ‘lamentable news’ from Ireland of ‘starvation’ and ‘sickness’ and of how glad he was that he had left the country

I thank God for leaving it at the time I did...This is a fine plentiful country, there is no person starving here, I am sure the dogs in Sydney destroys more beef and bread than all the poor in Ireland can afford to eat, there is one good thing in Sydney, that the poor man can afford to eat as good beef and mutton as the rich man—we are very comfortable thanks be to God.

Peter’s family had arrived in 1842 with him in Sydney from Ballyhaise in County Cavan on the government immigrant ship Margaret. Lack of money at the time had forced him to leave one very young daughter at home in Ballyhaise with her grandmother. In his letter, which included a much needed £2 for his ‘poor broken-hearted mother’, Peter begged his brother and his mother to send Mary Anne out to them through arrangements being made by Caroline Chisholm[8], ‘The Emigrant’s Friend’ and she arrived in Sydney on the Sir Edward Parry in February 1848. It is worth noting that this ship carried the first group of what might be called Irish ‘famine refugees’ to Australia well before the first ship carrying the now well-known Irish orphan girls, the Earl Grey, anchored in Sydney Cove on 6 October 1848.

During, and for some time after, the famine years, Irish workhouses were severely over-crowded. In 1849, 250,000 people were being accommodated: by June 1850, there were 264,048. Although the death rate in these institutions was, so many destitute people clamoured to be admitted that there was rarely room to spare. A general emigration scheme was introduced in 1849 that allowed Boards of Guardians to help paupers emigrate. People who were judged as able to work and who had been in the workhouse for over a year were eligible. Between 1849 and 1851, 1,592 men, women and children emigrated under the terms of this scheme.