There was a strong impression among some contemporaries that the attempt to abolish certain pastimes had done more harm than good because it had resulted in the working-classes being left with very few outlets for leisure, other than those of a debased kind. Drunkenness, violence and fornication, it was claimed, were on the increase. This alarm that moral standards were declining combined with the fear that the social stability of the country was being undermined. The MP, Robert Slaney, argued that it was the duty of those governing the working-classes to provide suitable alternative recreations for those people who otherwise ‘will fly to demagogues and dangerous causes.’ [1] By the 1830s, there was a growing sense among reforming and Evangelical groups that, though the working-classes seemed to have an inbuilt disposition towards spending any free time they had in sexual excesses, gambling and drinking. The middle and upper-classes were not entirely free from blame or responsibility for this situation.

There were several reasons for this feeling of guilt. Urbanisation and enclosures, it was argued, had resulted in a loss of public open spaces and footpaths and hence restricted the scope of working-class leisure time activities. As a result they were driven from comparatively healthy outdoor pastimes towards the numerous temptations offered by drinking houses. It was not until the opening of the Birkenhead and Manchester parks in the 1840s that serious consideration was given to setting up places of amusement within the parks themselves for the playing of games and sports. [2] It was not until the 1850s and 1860s and in some places the 1870s, that municipal parks were established in most provincial towns and cities. Nearly all the places of cultural improvement from which the working-classes could benefit -- art galleries, botanical gardens, libraries and museums -- were denied to them, either because they could not afford the subscriptions or entrance fees or because they were, if not positively excluded, at least not welcomed. Both the Museums Act of 1845 and the Public Libraries Act of 1850 [3] gave local authorities permission to build museums and libraries out of public funds. By 1860, however, only 28 library authorities had been set up. The lower classes had been influenced and harmed by the lax manners and moral of their social superiors. It was the duty of the rich, Hannah More and others argued, to set a wholesome example to the poorer classes through their own behaviour and this was not being done.

The early Victorians were genuinely concerned and bewildered about how leisure time should be used. For one thing leisure was often associated with idleness, so while it was recognised that spare time could bring benefits it was also acknowledged that it had its dangers. In a society where the gospel of work was so deeply ingrained and its virtues so vigorously extolled, it was perhaps inevitable that leisure time should be regarded with suspicion. Leisure requires time. Though there are problems in trying to assess working hours historians agree that there was an extension of hours in the early nineteenth century. [4] Factories imposed a twelve or thirteen hour day as opposed to the ten-hour norm of pre-industrial society. The factory movement may be seen as sanctioned and motivated by a desire to return to the norm, an achievement symbolically if not actually achieved in the Ten Hours Act of 1847. 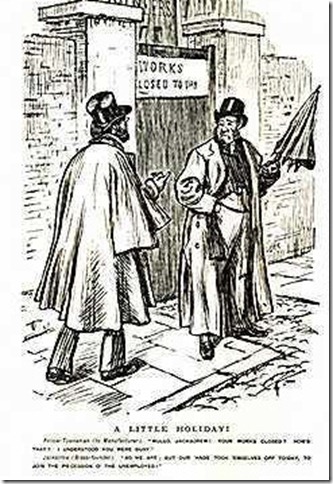 Coalminers, whose hours in the eighteenth century were relatively short, six to eight hours a day, were by 1842 nearly all working a twelve hour day with only short breaks for refreshment. Agricultural workers too suffered an increase in hours in the 1830s. In mining, agriculture, domestic service and the ‘dishonourable’ sections of the artisan trades and in all domestic work, the eighteenth century norm had been breached and hours were longer.

After 1850, the campaign for the nine-hour day started in the building trade, but success was limited until the economic boom of the early 1870s when most organised trades were able to breakthrough to a 54 hour week and by and large were able to maintain than position in the subsequent depression. The campaign for the eight-hour day was even longer in gestation than that for the nine-hour day. Despite all the pressure mounted in the 1890s and beyond, reduction in hours was insignificant on a national scale until 1919 and 1920 when seven million workers obtained reductions. Collective bargaining was unquestionably the chief means by which hours of work were reduced. Parliamentary action was of marginal importance by comparison. In the nineteenth century, it was never used overtly to control the hours of adult males. The key breakthroughs were achieved without parliamentary aid and acts, such as those in 1874 (reducing the hours of factory textile workers to 56 and a half), 1902 (a further reduction of one hour a week for factory workers) and 1909 (restricting underground work in the coalmines to eight hours), had only a marginal effects on the overall national statistics. [5]

If some regularity had been introduced to the working week by 1900, can the same be said for the working year? There had been a sharp decline in the number of holidays that were recognised and observed since the seventeenth century. They continued to be observed, with some regional variation, around Christmas or New Year, at Easter and Whitsuntide, at the local fair, feast or wake, and to some extent on such national days as the 5 November and Shrove Tuesday. They were not yet holidays with pay but their existence established a precedent that others later could follow. It was in the areas where holidays were measured by the day that the Bank Holidays Acts of 1871 and 1875 were of most significance. [6] They were not the first legislative recognition of holidays, which was included in the Factory Act 1833 but they were the first in which the state’s intervention was widely recognised and applauded. In the late nineteenth and early twentieth centuries employers increasing conceded holidays to their workforce. Brunner Mond, Lever Bros., the Gas Light and Coke Company, the London and North-Western Railway Company and the Royal Dockyards had done so by the 1890s. In 1897, the Amalgamated Society of Railway Servants negotiated one-week’s paid holiday after five years service. Other unionised workers, in coal and iron, for example, were putting forward similar claims before 1914. 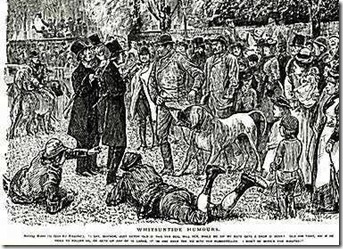 The hours of work for the working-classes are relatively easy to establish in comparison to those of the middle-classes. There are no national statistics and only the most scattered and perhaps unrepresentative data. Three trends may be distinguished. First, within the professions and the civil service hours were relatively short and imprecise until late in the nineteenth century, perhaps six hours a day. In the private sector, clerks worked rather longer hours, generally 40 hours per week in five days. Secondly, among businessmen, the days of long hours occurred in the first half of the nineteenth century and by 1900 they too began to internalise the 9 to 5 norm. Finally, at the lower end of the middle-classes, amongst shopworkers, hours were notoriously long and remained so. After over fifty years of effort to curtail hours, a House of Lords Select Committee in 1901 could only confirm that many shops were working 80 or 90 hours a week. Pressure from the Shop-Assistants Twelve Hours’ Labour League, founded in 1881, and from the Early Closing Association did result in some improvement but the shift towards a legislative solution was only very partially successful. The 1911 Act did, however, enact a half-day holiday. As far as annual holidays were concerned the middle-class workers undoubtedly had the advantage and in 1875 the Civil Service Inquiry Commission indicated that clerks working for insurance companies, solicitors, banks, railway companies and the civil service were at getting at least two week’s holiday a year. They had achieved this some seventy-five years before the bulk of manual workers.