George Canning had already held the post between 1807 and 1809. Only his unwillingness to serve with Castlereagh prevented his reappointment in July 1812. By 1816, Canning and Castlereagh appeared to have made up their differences, at least outwardly, and Canning joined the cabinet. He had a hand in drafting the 1820 State Paper and accepted it as the basis for his own policies once in office. The real contrast between Castlereagh and Canning was not in policy but in personality and public image. Castlereagh was hesitant and shy, Canning was a speaker with a strong sense of humour. Castlereagh was popular at Court but largely because as Leader of the House of Commons he had had to defend the government’s repressive policies against radicalism, unpopular in the country. Canning was very popular with the public. Castlereagh was cautious and was only pushed into disagreement with Britain’s allies by the pressure of public opinion. Canning was more flamboyant, setting himself vigorously in the van of public opinion and ruthlessly pursuing British interests and gained a reputation as a crusader for liberalism and nationalism. Metternich saw him as the evil genius of revolution, ‘a malevolent meteor, this scourge of the world, a revolution in himself’. 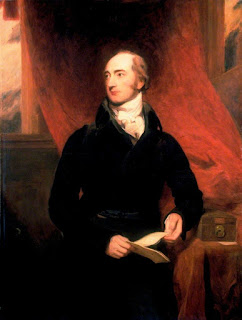