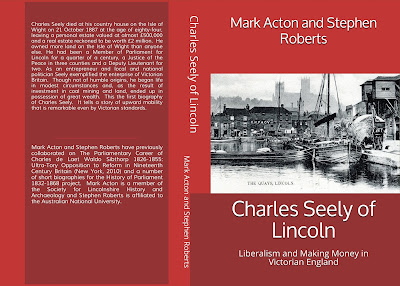 The first volume in the new series, written in conjunction with Mark Acton, looks at Charles Seely, a major figure in Lincoln’s economic and political development.
Seely died at his country house on the Isle of Wight on 21 October 1887 at the age of eighty-four, leaving a personal estate valued at almost £500,000 and a real estate reckoned to be worth £2 million. He owned more land on the Isle of Wight than anyone else. He had been a Member of Parliament for Lincoln for a quarter of a century, a Justice of the Peace in three counties and a Deputy Lieutenant for two. As an entrepreneur and local and national politician he exemplified the enterprise of Victorian Britain. Though not of humble origins, he began life in modest circumstances and, as the result of investment in coal mining and land, ended up in possession of great wealth. This the first biography of Charles Seely. It tells a story of upward mobility that is remarkable even by Victorian standards.
Posted by Richard Brown at 18:34