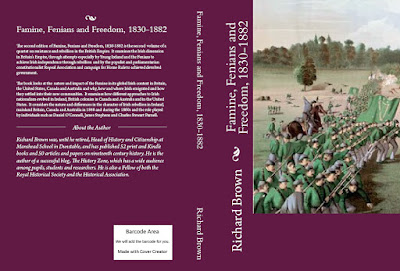 Famine, Fenians and Freedom, 1830-1882 is the second book in the Rebellion Quartet, a series looking at resistance and rebellion in the British Empire.  It examines the Irish dimension in Britain’s Empire, evident in Three Rebellions: Canada, South Wales and Australia, through attempts especially by the Young Ireland and Fenian movements to achieve Ireland’s independence through rebellion between 1830 and 1882 and by the populist and parliamentarian constitutionalist Repeal Association and campaign for Home Rule to achieved devolved government.


Famine, Fenians and Freedom, 1830-1882 focuses on the nature and impact of the Famine in its global Irish context in Britain, the United States, Canada and Australia. Why, how and where Irish emigrated and how they settled into their new communities. How different approaches to Irish nationalism evolved in Ireland, British colonies in Canada and Australia and in the United States and why it failed to achieve its objectives between 1830 and 1882 and the political character of the Irish diaspora. It also explores the nature and differences in the character of Irish rebellion in Ireland, mainland Britain, Canada and Australia in 1848 and during the 1860s looking especially at its military character and failure. The role played by individuals such as Daniel O’Connell, Thomas Davis, John Mitchel, John O’Mahony, James Stephens, John O’Neill, John Devoy, Michael Davitt, Isaac Butt and Charles Stewart Parnell.

The first edition was well received by reviewers and this edition has given me the opportunity to revisit material originally researched and written between 2005 and 2009 taking account of the most recent research and publications. I have delved further into newspapers from Britain, Ireland and Australia and have added further references to them. I have also extended the starting point for the book back by a decade to 1830.
Posted by Richard Brown at 18:30 No comments:

Email ThisBlogThis!Share to TwitterShare to FacebookShare to Pinterest
Labels: Books

After Brexit came the election of Donald Trump as the US President.  If Brexit was a shock, Trump’s election was an earthquake…no one thought he would get the Republican nomination let alone win the election against the experienced if not popular Hilary Clinton.  The election campaign, especially its last weeks, was one of the most visceral I’ve ever seen with making promises that he will need to honour—though in some cases this is unlikely—with the FBI saying it was reopening investigations into Hilary’s private email server ten days or so before election day and then withdrawing from investigation a few days later when the damage to Hilary’s already fragile reputation was done.  With Hilary wining the popular vote but Donald gaining the electoral college votes and the presidency, the result was hardly a ringing endorsement of the processes through which American democracy functions. 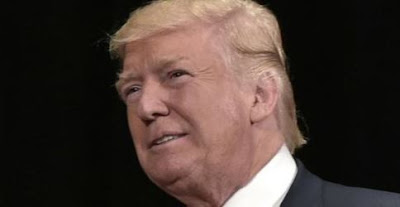 One of the major criticisms of Trump in the election campaign is that he has little experience of Washington but this misses the point that it is precisely because he has no experience that he was elected.  His brand of authoritarian populism, his notion of ‘American First’ appealed to those Americans for whom globalism has paid no dividends and whose lives have been blighted by the impact of untrammelled global free trade and who see no real benefit from the United States acting as the arbiter of global affairs.  What Trump is is an extremely successful if ruthless businessman who tweets what he thinks and who had vast experience in running and particularly managing things and increasingly people believed that he had the skills necessary to bring an expanding federal state to heel by not being prepared to do things the way they’ve always been done.  For the electorate this is his greatest strength but it is also his greatest weakness as the whole panoply of the Washington establishment will be against him and will obstruct his changes.  For a US President to get his policies accepted by Congress, there needs to be a degree of consensus; without this he becomes a ‘lame duck’ with the Washington political elite—and it has inexhaustible patience and ability to ‘dig the dirt’--simply waiting for his term of office to expire.
Posted by Richard Brown at 09:57 No comments:

2016, the year that the ‘commentariat’ got just about everything wrong!  It was supposed to be a victory for ‘remain’ and Hilary Clinton preparing for her inauguration as US President half way through next month…well, no.  Britain was supposed to make a further…if perhaps reluctant…commitment to the European Union with an economic meltdown if this did not occur as companies abandoned what would become the Titanic of economies; that voting leave would result inevitably according to David Cameron and other ‘remainers’ in leaving the single market and the customs union, something now denied by the ‘remoaners’ and especially the Liberal Democrats who respect the referendum result—remember it was advisory not binding--but want to have another just to make sure and perhaps a third one for two out of three!!  The irony is that, although three out of four people eligible to vote did so, the percentage was lower amongst younger votes, some of whom are now complaining that the ‘baby boomers’ have stolen yet another part of their inheritance.  Brexit was not expected to happen and neither side in the debate had made any real provision for this eventuality…any sensible government would have taken steps to plan for Brexit even if they didn’t expect it to happen.  And when it did, instead of staying on to help with the transition to a new Prime Minister and to sort out the mess of his own choosing, David Cameron simply quit within hours of the result…it was a bit like, ‘well you didn’t take my advice, so I’m off!!’  Almost a hissy fit!!!!! 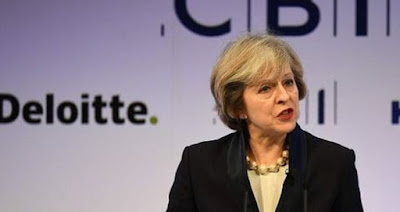 So why did England and Wales vote for Brexit?  Scotland and Northern Ireland voted to remain, though in NI’s case by a small majority.  This in itself caused problems as Scotland then demanded some sort of accommodation with the EU to recognise that it did not vote to leave.  This raised significant constitutional issues that have yet to be resolved…how do you accommodate a devolved, but not federal, structure within a unitary constitution?  The result is that Scotland demands that it has a special status under devolution in relation to the referendum despite the fact that the UK as a whole voted for Brexit by a significant if not enormous majority.  We may still be a ‘United’ Kingdom in theory but in practice that is clearly no longer the case.  This explains why the current mantra is ‘Yes, we accept the result of the referendum and the will of the people….but!!!!!’  The metropolitan elite cannot understand it and, if some of the recent comments in the press are a good indicator, some are still in denial about it all…they’ll wake up from a bad dream and the referendum won’t have taken place.  It’s the Peasants Revolt all over again but this time the peasants have got what they want…or have they?  Just as Richard II and his ministers betrayed the peasants in 1381 so constitutional niceties, legal arguments, practical politics and the realities of negotiation from March 2017 may well see yet another betrayal…this is what we’ve negotiated and Parliament’s agreed so that’s it whether or not there’s control over free movement of people or complete severance from the EU…it’s economics silly!!
The reality is that because there was little planning for Brexit, the whole thing is a mess.  Whoever allowed a referendum bill to go through Parliament that did not specifically make the result binding was really incompetent…I cannot believe that nobody noticed that.  A conspiracy theorist might well argue that this was deliberate so that government could twist its way out of taking account of the result if it was leave…though I tend to the cock-up theory of politics.  And of course it’s also a mess for the EU…it has as little an idea of what Brexit will mean in practice as the government.  Yes it’s all…well don’t expect an easy negotiation from us but it then has to get through all 27 countries and how do you do that successfully? No one knows.  It’s almost a back of the cigarette packet situation. Yes it would have been easier to stay within the EU…certainly my own view…but that’s not how the people voted.
Posted by Richard Brown at 12:03 No comments:

The West’s blame and the West’s shame

Watching Newsnight yesterday evening was one of the worst examples of a political post-mortem I think I’ve ever experienced.  The subject was the imminent fall of Aleppo to the Russian supported government of President Bashar al-Assad that commentators think represents perhaps not the end of the civil war but the beginning of the end of the civil war.  Aleppo itself may not matter much on Moscow's strategic chess-board. But the defeat of the rebel opposition there underscores the extraordinary turn-around in President Assad's fortunes. Before Russia intervened President Assad was on the ropes, his military power crumbling; now it looks as if he’ll win.  The West’s response…a fiery exchange at the UN, with US Ambassador Samantha Power accusing Syria and its allies of contributing to ‘a noose around civilians’ asking  ‘Are you truly incapable of shame?’


She is, of course, right. The civil war has been characterised by a total indifference to the fate of civilians who have been subjected to unspeakable atrocities, a new barbarism.  But the West is also culpable.  Since the invasion of Iraq in 2003—either an unprovoked assault on an independent country that may have breached international law or something authorised by United Nation sanction—the West has completely failed to stabilise the region and arguably has made the situation worse.  By removing despicable dictators in Iraq and then in Libya, initiating regime change and then failing to provide the mechanism to create a stable future, the West has been guilty of gross stupidity.  The scenario seems to have been…remove dictator, establishing a western style democratic government, let the liberated people get on with this and then act surprised when it all falls apart.  What this shows…apart from the hubris of the West…is that you can’t simply transplant democracy to countries with no real tradition of liberal democratic institutions.  The same applies to the so-called ‘Arab Spring’---I remember commenting on my blog at the time that the 1848 European revolutions came to mind…things that shone brightly and briefly and were then snuffed out by the forces of reaction…and so it was.  The West encouraged political aspirations and then expressed surprise when things did not turn out as they believed they ought.  The West’s interference in the region has largely been disastrous.


As the bombs continue to fall on Aleppo and its people, we sit well fed in our warm, comfortable houses and wring our hands at the inhumanity of man.  We moralise.  We call for the war to end, for the evacuation of civilians, for the feeding of the people starved for weeks.  We give words…words…words.  But we do nothing.  In fact, words are all we can give as the West has effectively abdicated any responsibility it may have felt for Syria.  I am reminded of Sir Humphrey’s words on the principles of foreign policy…’perhaps there was something we could have done…but it’s too late now!’
Posted by Richard Brown at 10:30 No comments: