Australia and Irish settlement: after the Famine

A strong Irish network existed in Melbourne before 1850 and indeed the meeting place of the first Parliament of Victoria was St Patrick’s Hall.[1] Bounty immigration swelled Irish numbers before 1850, but major waves of migration commenced only after the discovery of gold in Victoria and during the reconstruction of Irish agriculture in the period after the 1840s famine.[2] As a result, while the vast bulk of Irish settlers in Melbourne were drawn from rural Ireland and most likely from the small land-holding class, a steady stream of Irish professional men arrived in the 1850s, especially lawyers and doctors, who made an early and long-lasting mark on Melbourne life. The new University of Melbourne was shaped by its association with Trinity College, Dublin, most notably through the Irish political economist and one of the four foundation professors at Melbourne, W.E. Hearn. The first chancellor of the university, Redmond Barry, had also graduated from Trinity and emigrated in 1839. He founded the Melbourne Mechanics Institute, sat on the Supreme Court bench and played a central role in the creation and expansion of the State Library of Victoria.[3] Another Trinity graduate, Richard Ireland, born in Galway in 1816, was admitted to the Irish Bar in 1816 and arrived in Melbourne in 1852, where he defended the Eureka rebels before becoming a minister in governments headed by Irishmen Charles Gavan Duffy and John O’Shanassy.[4]

In Melbourne, the Irish settled most densely in the inner city. For a time some of the poorer lanes of the central city sustained conspicuous Irish populations. Yet the Irish-born were never a numerical majority in any local government area or city ward, even though they may have controlled local political and cultural life. In the city itself, Bourke, Gipps and Lonsdale wards had populations which were more than 20 per cent Irish in 1871, the peak year for the city’s Irish-born population. Irish women, who most typically worked in domestic service, moved from these concentrations to wealthy suburbs such as St Kilda and Kew. For most of the nineteenth century the inner municipality of Hotham (North and West Melbourne) was the most Irish locality, largely because of its position near the unskilled labour markets in the railway yards, warehouses and wharves and in carting at the western end of the central city.

Ulster Protestants gradually established a place in the skilled trades of Melbourne and also dominated some civil service departments by the end of the 1860s. Catholic Irishmen were typically unskilled workers or small shopkeepers. They too sought to cement networks in government employment, filling many positions in the ‘uniformed working-class’ such as the railways, post office and customs services. From its formation, the Victoria Police was structured along the same lines as the Royal Irish Constabulary and the typical constable was likely to have been born in Ireland, as were many of those he arrested. There had been surprisingly little movement during the Famine and the heaviest influx was delayed until the 1860s. While the 1850s remained the most significant decade for Irish migration to Victoria, perhaps more important single years of emigration were 1864, 1879 and 1884, peaks associated with crises in Irish agriculture. The last great Irish immigration occurred between the mid-1870s and mid-1880s when immigration to the United States was less attractive because of depression in its economy. Australia was only ever the destination of choice for Irish immigrants when recession elsewhere made foreign labour markets unattractive for immigrants. The same applied when Australia experienced depression as it did in 1867, 1878-1879 and 1885-1886 when Irish immigration slackened. Colonial demand for immigrant labour and a willingness to provide assisted passage was greatest when there was significant economic growth in the absence of a large settled population. Victoria, South Australia and Tasmania offered little assistance after the 1860s while Queensland invested heavily in immigration during the 1879s and 1880s. NSW stopped providing assistance between the late 1880s and 1910. Since most Irish immigration depended on some form of state or private assistance, this resulted in settlers in different colonies coming largely from different generational cohorts. The most significant county of origin remained Clare but comparatively rich farming regions such as Meath, Tipperary and Armagh were more highly represented than the poorer western counties of Kerry, Galway and Mayo. Extended chain migration allowed these regional concentrations to persist until the last decade of the nineteenth century. 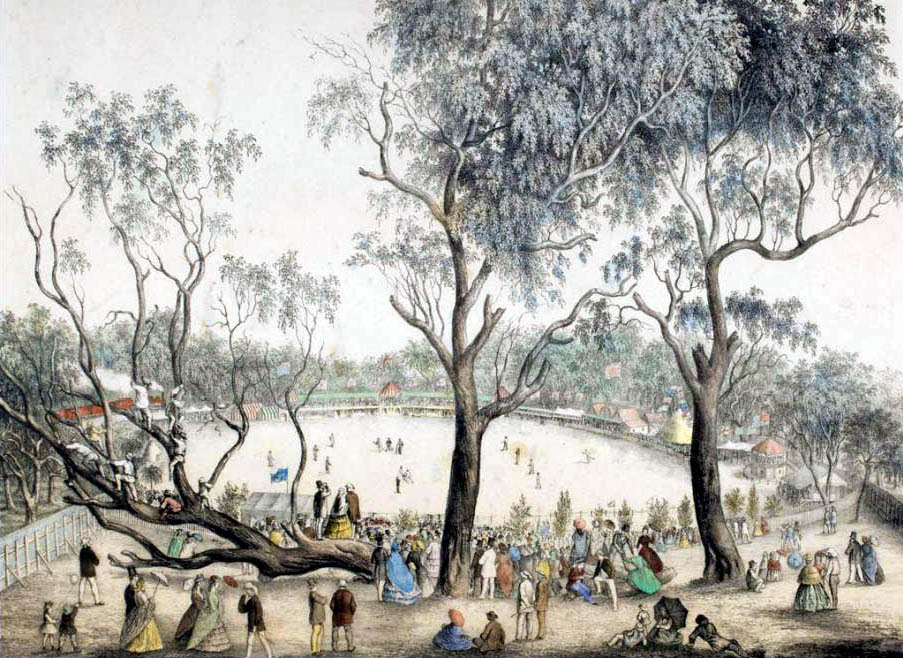 Although Victoria proved a magnet for immigration in the 1850s, the other colonies continued to receive Irish immigrants. The 1859 census for Western Australia records 2,406 Irish-born representing 16 per cent of the total non-Aboriginal population. This had risen to 3,569 by 1870 and 9,862 during the gold rush of the 1890s though many of these came from the eastern states rather than directly from Ireland. The Irish made up about a tenth of the convicts sent to the colony between 1850 and 1868.[5] NSW also saw an increase in immigration in the 1850s partly as a result of gold but also because of the continuing distress in Ireland. Most assisted immigrants between 1848 and 1870 were Catholic but about a fifth was Protestant. Apart from higher levels of literacy, there was no real difference between the two religious groups: men tended to be labourers and women farm or domestic servants. In the 1850s, for example, there was much distress in rural Donegal.[6] Under the British landlord system, the native inhabitants had to pay rents and were liable to be evicted if they could not keep up the payments.[7] After 1855, some of these emigrants took advantage of the NSW assisted immigration scheme. Under this, residents of NSW could pay a contribution to the government in Sydney to bring out a relative or friend from Britain or Ireland with the government subsidising the cost of the passage. As the immigrants of 1855 became established in NSW, many sent sums of money ranging from £5 to £50 back to Donegal to help their relatives to survive or to emigrate. By 1858, there was mounting concern in Australia about news that landlords were squeezing Donegal people off the land to make way for more profitable farming procedures such as large-scale sheep-raising, using Scottish shepherds.

In May 1858, Archdeacon John McEncroe, a Catholic clergyman from County Tipperary, convened a public meeting in Sydney to form a Donegal Relief Fund. McEncroe had been in NSW since 1832 and was the founder of a periodical newspaper, the Sydney Freeman’s Journal. He sought to make systematic use of the government’s assisted immigration scheme and took a deputation from the Donegal Relief Fund to interview government officials in July 1858. He gave the government a deposit of £900 pounds that then issued a certificate providing passages for 225 people. This special fare to Australia was £5 per male and £3 per female. McEncroe made subsequent deposits, bringing the total for 1858 to £3,800 and the government issued further certificates for passage. The first batch of Donegal Relief Fund migrants arrived in Sydney from Liverpool on the Sapphire in May 1859 after a voyage of 15 weeks. The vessel landed 286 passengers though not all sponsored by the Donegal Relief Fund. The sexes were evenly balanced with 138 males and 133 females over 12 years including 42 married couples, plus eight boys and seven girls under 12 years. The arrival of each the subsequent four Donegal Relief Fund ships was reported in the Sydney Freeman’s Journal, which recommended the passengers to prospective employers as farm labourers or domestic servants. The NSW government encouraged the immigrants, especially the men, to go to ‘immigrant depots’ in country centres such as Maitland, Newcastle and Bathurst, from where they would be hired by landholders. The Donegal Relief Fund enormously boosted the number of Irish migrants to NSW in 1859. According to parliamentary reports, 3,723 immigrants entered NSW that year from all sources under government’s assistance scheme. Of these, the Irish accounted for 2,544, more than 68 per cent of the total, of which about a third came under the Donegal Relief Fund scheme.

Only two per cent of those who left Ireland in the nineteenth century came to Australia and the majority of these came through assisted passage. This seems to have been more likely the case for women since British and colonial authorities maintained assisted female emigration over longer periods and at lower rates. Irish women made up between 50 and 60 per cent of assisted female migrants during the 1850s and 1860s and in NSW they made up to 80 per cent. The peak periods of female immigration coincided with years of heaviest assistance. There was a boost to early Irish female immigration to the colony with government-sponsored ‘bride ships’ of the 1850s containing poor, predominantly Catholic Irish women.[8] Many of these girls went into the country as servants and sometimes married Protestants but more often men from the bond class. They represented a small if important part of the large-scale process of female migration to Australia that gathered momentum in the 1850s and 1860s. Some 1,700 single British and Irish women came to Western Australia but substantially more came on colonial-sponsored schemes to NSW (18,000), Victoria (13,000), South Australia (9,100), Queensland (46,000) and Tasmania (1,600).[9] The reason why many of these women migrated may have been to seek a spouse[10], but the attitude of colonial society was more ambiguous and bidders at the immigration depot included middle-class women seeking domestic servants of whom there was a major shortage as well as single men.

Over half of Irish women, even in the 1880s and 1890s entered domestic service and they appear to have not sought alternative avenues of employment though their daughters frequently entered factory work. There were several reasons why a higher proportion of Irish women than any other nationality entered domestic service. First, they came from a largely rural background and had no familiarity with factory work. Secondly, domestic work provided food and lodgings as well as wages and allowed women to save money easily to send back home to pay debts, to buy land or acquire a few luxuries. Finally, domestic service was a job that did not compete with the male labour market and work was available even during economic depression.

The Irish in Australia in the nineteenth century were simplistically seen as either Catholic, nationalist and republican or Protestant, empire loyalists, Orangemen or members of Masonic lodges. Irish Protestants made up a small proportion of the total Irish migration and comprised about five per cent of the total Australian population in the nineteenth century. Despite this, they played a disproportionately important role in the development of the country.[11] They can be divided into the Anglo-Irish who originated in the Irish gentry and who emigrated to Australia from the 1820s and Ulster Protestants representing a cross-section of Ulster society. The Anglo-Irish, dependent on their British connection, became the main stay of colonial administration, followed traditional routes into the law, the church or the military or entered the professions. The Trinity College link proved important and by 1880, for example, four of the five judges on the Supreme Court of Victoria were Irish Protestants.

The Australian Irish, like the American Irish, came from a variety of destinations and had emigrated for a variety of reasons. Many were born in Ireland but others arrived only after perhaps years in some British city or in the eastern and then western United States and who came with other ‘diggers’ in search of wealth on the goldfields. Yet while Irish descendants in America have retained pride in their ancestral culture, this is less the case in Australia. [12] The nineteenth-century Irish represented the major discordant element in what were strongly Anglicised colonies. Their role as loyal opposition, niggling and ridiculing the dominant English colonial culture was however a defining element in the shaping of Australian society and the Australian character. Their identity was Australian first and Irish second.

[10] Britain had a ‘surplus women’ problem: in 1851 there were 1042 women to every 1000 men and by 1901 this had risen to 1068. Assisted emigration was a possible solution to this problem for Britain by reducing the number of women and for the colonies by reducing their imbalanced sex-ratios.