Major-General Lachlan Macquarie, the fifth governor of NSW but the first military officer (Phillip, Hunter, King and Bligh had all been naval men) held office from April 1809 (he took up his commission as governor on 1 January 1810[1]) until his resignation in 1821. [2] As Governor of NSW, he also assumed control of the North Island of New Zealand by the appointment of a Justice of the Peace for the Bay of Islands.[3] After the military coup in 1808, the British Government decided to recall the NSW Corps and replaced them with the 73rd Regiment.[4] As Macquarie was the officer commanding the 73rd Regiment, he was at a distinct advantage to his predecessors as senior officer of the garrison as well as Governor. As with previous governors, Macquarie was given absolute authority to make laws and carry them out.[5] The first exercise of authority was in the revoking of all controversial actions of the rebel regime including government appointments, land grants, leases, sentences and pardons.[6] His Instructions were

To improve the Morals of the Colonists, to encourage marriage, to provide for Education, to prohibit the Use of Spirituous Liquors, to increase the Agriculture and Stock, so as to ensure the Certainty of a full supply to the Inhabitants under all Circumstances.[7] 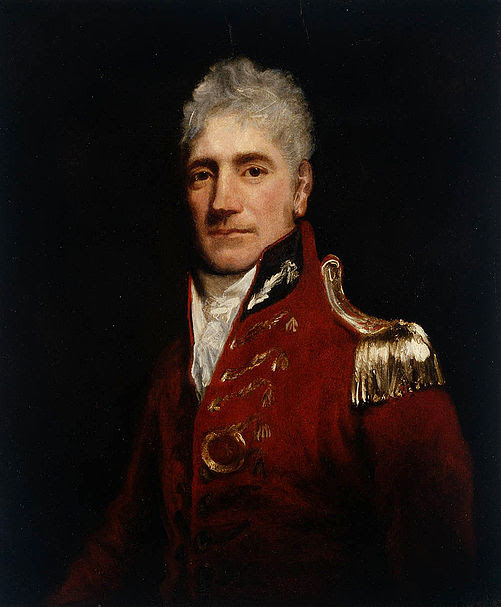 Macquarie insisted on morality, virtue and temperance.[8] He closed 55 inns[9] and increased tax on imported liquor, he remodelled the commissariat[10] and the organisation of the Police Fund as the basis of colonial revenue[11], levied customs duties, opened a new market place[12], created a coinage in 1813 to replace barter, (particularly the ‘rum currency’) and established the first bank in 1817.[13] He opened schools for the young so that the children would become better citizens than their parents.[14] He used emancipist settlers as teachers and eventually at his request, qualified teachers were sent out from England. He allowed ex-convicts to be re-admitted to the rank in society they had forfeited including appointing three emancipists (D’Arcy Wentworth, Andrew Thompson and Simeon Lord) as magistrates in 1810.[15] Macquarie founded new towns at Richmond, Castlereagh, Pitt Town, Wilberforce and Windsor now referred to as the five ‘Macquarie towns’ to the west of Sydney and expanded the settlement. He visited VDL twice[16], Newcastle and Illawarra[17] and founded Port Macquarie. He encouraged exploration including the crossing of the Blue Mountains in 1813 and opening access to western lands and was responsible for the extension of the colony.[18] Macquarie was also responsible for expanding the public works programme including the first general post office[19], new army barracks, a road to Parramatta from Sydney and a new general hospital. Overall he was responsible for 265 public works of varying scale during his administration, many the work of his chief architect Francis Greenway, an ex-convict.[20] They included new army barracks and three new barrack buildings for convicts, roads to Parramatta and across the Blue Mountains, a hospital, castle-like stables and five planned towns built out of reach of floodwaters along the Hawkesbury River. Central to Macquarie’s administration was his concern for public morality. In some of his earliest orders the prevailing habit of cohabiting without marriage was denounced[21], constables were directed to enforce laws against Sabbath breaking[22] and a regular church parade was introduced for convicts in government employment.[23] It seemed that he was successful in increasing ‘Religious Tendency and Morals’ as both church going and the marriage rate increased.

As the strongest inducement to reform Macquarie decided that ex-convicts, when they had shown that they deserved the favour, should be readmitted to the rank in society they had forfeited. This policy was approved by Liverpool as well as by Wilberforce and the select committee on transportation in 1812, but it aroused immediate indignation among immigrant settlers and military officers and alienated the very classes whose co-operation Castlereagh had advised him to foster. By 1818, he went so far as to suggest the cessation for three years of all immigration apart from ‘respectable Monied Men’. He had found many of the free immigrants unsatisfactory settlers and disapproved of their reluctance to fraternise with ex-convicts.

[17] Macquarie refers to the Northern Settlements at Port Macquarie and Newcastle 1821 in Macquarie to Bathurst, 30 November 1821, HRA, Series I, Vol. 10, p. 573: ‘I have lately made Tours of inspection to the Northern Settlements at Newcastle and Port Macquarie, and afterwards to Bathurst and Illawarra or Five Islands; all of which are fine rich fertile Districts, and promise at no distant period to prove most valuable acquisitions to the Parent Colony. The result of My Observations on these Tours of Inspection I shall do myself the honor of reporting to Your Lordship in Person, on my arrival in England.’ Macquarie must have completed this Despatch some weeks after the date 30 November 1821. He returned to Sydney from the tour to the Northern Settlements on 21 November 1821, travelled to Bathurst and back 15-26 December 1821 and travelled to Illawarra and back 9-17 January 1822. Macquarie’s journals are Mitchell Library: A781 Journal to and from Newcastle, A783 Journal of A Tour of Inspection to Bathurst in Decr. 1821 and A786 Journal of a Tour to the Cow Pastures and Illawarra/in January 1822.