The importance and impact of drug taking across social boundaries in the nineteenth century has only recently become a subject of serious historical study. [1] Opium or opiate compounds were used widely in the first half of the nineteenth century and, though the main features of addiction and withdrawal had been known since the 1750s, most doctors still thought of opium not as dangerous or threatening but central to effective medicine. Until Pharmacy Act 1868 opium was on open sale and could be bought in any grocer’s or druggist’s shop. Regular ‘opium eaters’ were accepted in their communities and rarely the subject of medical attention. They were certainly not seen as ‘sick’, deviant or diseased as they were to be by 1900. Lack of access to orthodox medical care, the suspicion of the medical profession and positive hostility to professional medical treatment ensured the position opium held in popular culture as a major form of self-medication. [2] Society generally used opium for sleeplessness, headache or depression and these shaded imperceptibly into non-medical or ‘recreational’ uses.

Opium consumption was particularly high in the Fens in the nineteenth century and, according to an analysis made in 1862, more opium was sold in Cambridgeshire, Lincolnshire and Manchester than in other parts of the country. The Fens were an unhealthy, marshy area where medical assistance, especially for the poor, was severely limited and where many of the working-classes were prone to ague, rheumatism and neuralgia. The habit was limited to the low-lying areas centring on the Isle of Ely and south Lincolnshire. [3] The largest consumers were the labourers who came from the outlying fens rather than village or town dwellers. Why was opium of such importance in the Fens? There was a tradition of self-medication with opium being used to treat both people and animals. The introduction of new methods of exploiting the land resulted in declining standards of child care and an increasing in the doping of young babies with opiates: infant mortality in Wisbech was 206 per thousand in the 1850s, higher than urban centres like Sheffield. Doping young babies was essential as women could be away from home for long periods of time working on the itinerant ‘gangs’ that became a more source of employment after 1830. Opiates may have been used to dispose of unwanted children, though this was not peculiar to the Fens. Opium could be used as an escape from the perceived reduction of status for the agricultural labourer that resulted from enclosure and drainage. Certainly use for euphoric purposes was not uncommon in the Fens. Dr Rayleigh Vicars wrote in the 1890s:

...their colourless lives are temporarily brightened by the passing dreamland vision afforded them by the baneful poppy.[4] 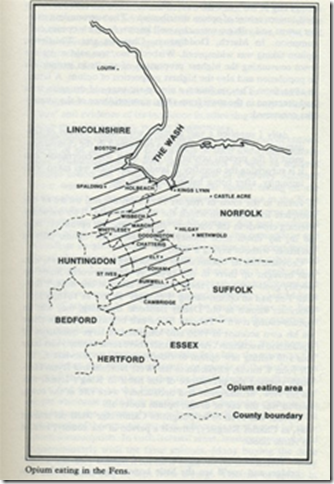 It is very difficult to estimate the effect opiate use had in the Fens though there may be a connection between it and the high general death rate. In the 1850s, it stood at 22 per thousand in southern Lincolnshire, a figure as high as the environmentally less agreeable industrial areas of Huddersfield and Keighley in Yorkshire.

Reaction to opium eating in the fens, with its population apparently able to control and moderate its consumption was markedly different from the concern expressed about the urban problem. The ‘stimulant’ use of drugs by the urban working-classes was perceived as a threat to public order in a way that did not apply in the Fens. This is indicative of the way in which views of opiate use were coloured by the social and class setting. The use of opium for child doping was attacked in the 1830s. Behind this was a desire to remould popular culture into a more acceptable form and a critique of the basic pattern of child rearing by the working-classes. Using opium as a scapegoat led to criticism of its use being diverted away from the realities of the urban environment to the individual failings of working mothers. The uses of opium by adults and for children in the rest of society went unremarked or were viewed more tolerantly. The writings of Thomas De Quincey and Samuel Taylor Coleridge, both frequent users, attracted a great deal of attention after 1830 and by drawing attention to the habit may have led to a gradual change towards a harsher, more restrictive attitude. [5]

[1] See in particular Berridge, V., and Edwards, G., Opium and the People: Opiate Use in Nineteenth Century England, (Yale University Press), 1987, revised ed., (Free Association), 1999, and Foxcroft, Louise, The making of addiction: the ‘use and abuse’ of opium in nineteenth-century Britain, (Ashgate), 2007.

[3] High opium consumption may have characterised areas like this: there is evidence, for instance, of similar practices among the poor in the Romney Marshes in Kent. See, Beveridge, Valerie, ‘Opium in the Fens in Nineteenth-century England’, Journal of the History of Medicine and Allied Sciences, Vol. 34, (1979), pp. 293-313.