How did the banking system evolve after 1800?

Between 1800 and 1914, manufacturing industry grew steadily in importance to become dominant within the economy and this was reflected in the structure of class relations. The relationship between agriculture and industry changed tilting the economic balance of power in favour of the manufacturing class while Britain’s central position of in the international flow of commodities and capital ensured the continuing importance of the financiers and merchants of the City of London.[1] The landed interest was forced to come to terms with its changed circumstances. The nineteenth century saw the development of a closer relationship between property owners whether in agriculture or industry. The distinction between the two had never been complete, even in the eighteenth century where successful industrialists bought themselves landed estates and landowners exploited the mineral reserves beneath their land. Although by 1900, the landed, manufacturing and commercial classes had moved closer together in economic, cultural and political terms, they had not yet coalesced into a unified propertied class. [2] 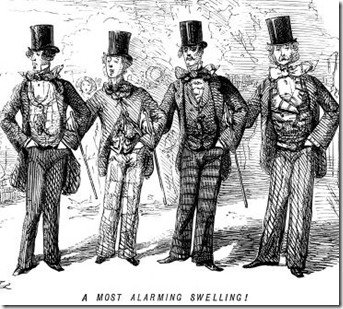 Changes in the banking system in the second half of the century stimulated a closer relationship between the two groups. In 1830, three different types of bank together formed the British banking system. [3] At the heart of the London financial system were the private banks such as Hoares, Childs, Coutts and Martins that had often developed out of older goldsmith businesses.[4] The private banks of the West End had many landed clients and were often heavily involved in the long-term mortgage business of the landed class. By contrast, the private banks of the City itself were mainly concerned with the provision of short-term credit for merchant firms and, to a much lesser extent, manufacturing business. The Bank of England and, perhaps less importantly, the Scottish chartered banks were concerned with the management of government finances but also carried out some private banking transactions for the merchant houses that comprised its major shareholders. The Bank was by no means a central bank that regulated the rest of the banking system; its main role was to facilitate the formation of the financial syndicates that purchased government stock.

The third type of bank was the country bank, a private bank located outside London.[5] These often arose as adjuncts of mercantile concerns and had strong banking links with both local landowners and industrialists. Though their businesses were highly localised, the country banks were tied into the national system of capital mobilisation through their use of London agents and correspondent offices, generally one or other of the London private bankers.

Major changes in the financial system began with the repeal of the ‘Bubble Act’ in 1825 and the two Companies Acts of 1856 and 1862.[6] These changes made limited liability and transferable shares more easily available to businesses and did much to stimulate the establishment of joint-stock banks in London and the provinces. The country banks were often involved in the formation of joint-stock banks, a number of these being in London. Agency arrangements between London and country banks were, in many cases, formalised in mergers to form large joint-stock banks. The tightening up of the banking system, especially in the 1844 Bank Act[7], enabled it to become more closely involved in capital mobilisation: agricultural wealth filtered through the country banks to London from where the money went to finance the industries of the north and midlands and to finance landowners’ mortgages.[8]

By the 1860s and 1870s, the City of London had become the hub of an international monetary system, with a particularly important group of ‘merchant banks’ specialising in the financing of foreign trade and in funding foreign government loans.[9] Such prominent merchant bankers as Rothschild and Baring, together with others such as Goshen and Hambros, were generally based around the businesses of émigré merchants and bankers and often continued with their merchant businesses alongside their banking activities.[10] The merchants and merchant bankers of the City formed a tightly integrated group with numerous overlapping business activities: they joined together to syndicate loans and to run the major dock, canal and insurance companies and dominated the board of the Bank of England. This City group was united through bonds of business, kinship and friendship and its cohesion was increased by the frequency and informality in the exchanges, coffee-houses and other meeting-places in the square mile itself.[11]

[2] See, for example, Rothery, Mark, ‘The shooting party: the associational cultures of rural and urban elites in the late nineteenth and early twentieth centuries’, in Hoyle, Richard W., (ed.), Our hunting fathers: field sports in England after 1850, (Carnegie), 2007, pp. 96-118.

Thanks for this excellent summary of the 19th century banking system, which I found during my research for a biography of Captain Scott's Antarctic photographer, Herbert Ponting - both he and his father worked in banking in a range of places in England between the 1860s to 1890s. Best wishes, Anne Strathie

Thanks I'm glad you found it useful.