In 1835, a series of reports was made by a House of Lords’ Committee on the State of Gaols containing appendices setting out much detailed information including gaols controlled by municipal corporations. These reports informed the drafting of the Prisons Act 1835 ‘for effecting greater uniformity of practice in the government of the several prisons in England and Wales’. The Act empowered Lord John Russell, the Home Secretary to establish a prison Inspectorate of five with only limited powers to inspect local prisons. [1] These were required to make an annual report for each of the establishments visited for the Home Secretary to present to parliament. The reports were initially divided between four districts (Home, Northern and Eastern, Southern and Western and Scotland with Northumberland and Durham), but this was reduced in 1853 to three (Northern, Midland and Southern), and to the Northern and Southern in 1863.

Colonial opposition to transportation built up in the 1830s and 1840s and this paralleled the emerging dominance of slightly different concepts of prison discipline from Westminster, the separate and silent systems.[2] Reformers discovered the prison as a place to teach order and discipline to the offenders, who were perceived as a fundamental threat to the stability of society. The basic idea was to hold prisoners in solitude to shield them from the supposed contaminating influence of other convicts. Being left in completely silence with only the company of one’s conscience and the Bible was to bring about the spiritual renewal of the offender. Also, a strict diet of work and military discipline would help to turn them into law-abiding citizens. Prison building aimed at transforming the prison from a physically and morally filthy place of confinement into a clean and rationally functioning reform-machine. Before 1830, attempts to enforce ‘solitude’ by separating prisoners in gaols had been largely unsuccessful. However, from the 1830s, separate confinement became an effective national policy largely because of the combination of new forms of state power through discipline, government and law with the notion of geographical uniformity. The connections between state power and effective centralised uniformity help to explain why the ‘separate system’ rather than alternative regimes was widely supported by prison reformers in the 1830s and 1840s and why it continued to be the lynchpin of penal policy even after its reformative claims had been rejected.[3]

The initial, practical application of the silent and separate systems occurred in the United States in the 1820s.[4] The Auburn system, also known as the New York System, evolved during the 1820s at Auburn Prison. Convicts worked during the day in groups and were kept in solitary confinement at night, with enforced silence at all times. This ‘silent’ system promised to rehabilitate criminals by teaching them personal discipline and respect for work, property and others. The ‘separate’ system, by contrast, was based on the principle of keeping prisoners in solitary confinement.[5] The first prison built according to the separate system was the Eastern State Penitentiary in 1829 in Philadelphia, Pennsylvania and its design was later copied by more than 300 prisons worldwide. Its revolutionary system of incarceration, dubbed the ‘Pennsylvania System’ encouraged separation of inmates from one another as a form of rehabilitation.[6] This was the basic idea behind the separate system favoured in the 1839 Prisons Act.[7] A group of experts, notably William Crawford a leading figure in the Prison Discipline Society and Reverend Whitworth Russell formerly chaplain at Millbank, advocated the separate system.[8] Lord John Russell, somewhat hesitantly, authorised the construction of a new national prison in London and Captain Joshua Jebb, subsequently appointed Surveyor-General of Prisons in 1846 and favourably disposed to the separate system, was entrusted with the design.[9] The result was the opening of Pentonville in 1842.[10]

The objective of such a prison or ‘penitentiary’ was that of penance by the prisoners through silent reflection in separate cells. At exercise time each prisoner held on to a knot on a rope; the knots were 4.5 metres apart so that prisoners were too far apart to talk. They wore a mask, the ‘beak’, when they were moved around the building so that anonymity was preserved. At the required church services each convict was confined to a separate box so that communication with fellow inmates was all but impossible. The plan was for the solitary confinement and anonymity of Pentonville to last for 18 months before a man was transported. It was believed that, thrown in upon themselves, in the quiet, contemplative state of the solitary cell, convicts, assisted by their Bibles and the ministrations of the chaplain would come to a realisation and repentance of their wrong doing.

It cannot be questioned, then, on grounds of reasoning, independent of experience, that the Separate system is better calculated to promote that great object of Prison Discipline — the reformation of the offender.[11]

The problem was that not every convict was quite so malleable; some assaulted warders, other developed serious psychological disorders or attempted suicide. Between 1842 and 1850, 55 prisoners in Pentonville went mad, 26 had nervous breakdowns and three committed suicide.[12] By the end of the 1840s, even the annual reports of the prison’s commissioners were compelled to admit that there were problems with the system.[13] 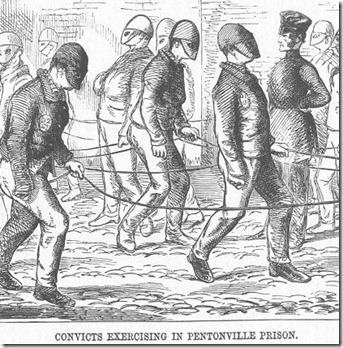 In the ‘silent system’ prisoners were still confined to their cells for most of the first nine months and twere forbidden from communicating with other prisoners. Prisoners who committed an offence could be put on a diet of bread and water, or chained up or whipped. The main elements of the regime were ‘hard labour, hard fare and a hard board’. Gone was any idea about useful or saleable work. Hard labour was intended to be hard and deliberately pointless. There were various kinds of hard labour. The use of the treadmill on which prisoners did ten minutes on and five minutes off for several hours. Oakum-picking involved separating out the fibres of old ships’ ropes so they could be re-used. The crank was usually in the prisoner’s cell. The warder could see how many revolutions the prisoner had made. Finally shot-drill was where heavy cannon balls were passed from one to another down a long line of prisoners. The food or ‘hard fare’ was deliberately monotonous. Hard beds replaced hammocks.[14]

The initial, optimistic logic of the separate system, together with pressure form the Home Office for national uniformity led some local authorities to establish the system in existing or purpose-built prisons. However, the operation of the silent system did not need large-scale improvement or reconstruction of prison buildings and also allowed prisoners to labour in association. Bedfordshire justices, for example, originally ruled out reform of Bedford gaol on the grounds of cost and when they did decide to rebuild they faced vociferous protests from ratepayers. Crawford and Whitworth Russell both died in 1847 removing the two most ardent advocates of the separate system. It had never been implemented across the country with the uniformity and rigour that they had wished leading to a mixture of both systems. However, within ten years the debate on prisons had shifted significantly and the issue was not whether the system should be silent or separate but whether the whole penal system was sufficiently severe. [15]

[2] Molesworth, William, Report from the Select Committee of the House of Commons on Transportation: together with a letter from the Archbishop of Dublin on the same subject, and notes, (H. Hooper), 1838, Ritchie, John, ‘Towards ending an unclean thing: The Molesworth committee and the abolition of transportation to New South Wales, 1837-40’, Australian Historical Studies, Vol. 17, (1976), pp. 144-164 and Townsend, N., ‘The Molesworth Enquiry: Does the report fit the evidence’, Journal of Australian Studies, Vol. 1, (1977), pp. 33-51.

[8] William Crawford’s influence was felt particularly in his Report of William Crawford on the Penitentiaries of the United States, addressed to His Majesty's Principal Secretary of State for the Home Department, (Ordered, by The House of Commons, to be printed, 11 August 1834), 1834 and Extracts from the second report of [William Crawford and Whitworth Russell] the inspectors of prisons for the Home District, (William Clowes and Sons), 1838.

[10] Tomlinson, Heather, ‘Design and reform: the ‘separate system’ in the nineteenth century English prison’, in King, Anthony D., (ed.) Buildings and Society: Essays on the Social Development of the Built Environment, (Routledge), 1984, pp. 94-119.

[12] Thomson, J. Bruce, ‘The Effects of the Present System of Prison Disciline on the Body and Mind’, Journal of Mental Science, Vol. 12, (1866), pp. 340-348 argued that ‘the separate system of prison discipline is trying upon the mind and demands the most careful attention on the part of medical officers, inasmuch as mental diseases are most prominent among criminals in prisons...’

[13] See for example, Burt, J.T., Results of the system of separate confinement, as administered at the Pentonville prison, (Longman, Brown, Green and Longmans), 1852.