The cause of public health was at a low point after the enforced retirement of Edwin Chadwick in 1854, but even so some progress was being made. The Vaccination Act 1853 required parents and guardians to arrange for the vaccination of infants within four months of birth. Even though there were no provisions for enforcement, by the 1860s about two-thirds of children born were vaccinated and the death rate from smallpox fell as a result. The Nuisances Removal Act 1855 was a consequence of the cholera epidemic of 1853-1854 and required local authorities to appoint sanitary inspectors.  It also gave magistrates the power to order the ending of nuisances and powers to the local authorities to enter a nuisance at the expense of the occupier.[1]

There was, however, a great difference between Parliament passing acts and enforcing an effective policy against the opposition of local authorities and property owners who saw sanitary reform as a source of unjustified expense. For all the efforts that had been made progress was slow. The death rate between 1841-1845 and 1861-1865 actually rose slightly and as a result it is fair to conclude that the general health and environmental position remained largely unaltered. Public health was a far more complex problem than the pioneers of the 1840s had envisaged. For Chadwick, public health was simply a matter of better sanitation and water supply. In reality, the problem had far wider environmental causes, pressure of population, bad housing and poor nutrition and Chadwick had persistently underestimated the importance of medical questions.

In the twenty years after 1854, the progress that was made in public health was largely through scientific and medical developments. This can be seen in the statistical analysis of mortality by William Farr in the Registrar-General’s department after 1839 and improvements in understanding how diseases were transmitted. Important independent investigations were made during the cholera epidemic of 1848-1849 by John Snow in London and William Budd in Bristol with both diagnosing the cause of cholera as a living organism spread in drinking water and breeding in the human intestine. [2] Indeed it can be argued that by 1870 analysis of the causes of health problems had run considerably ahead of effective administrative machinery for remedying them.

The eclipse of the career of Edwin Chadwick coincided with the rise of John Simon (1816-1904).[3] Trained as a doctor, he was appointed as the first medical officer of health for the City of London in October 1848 at a salary of £500 a year (eventually £800.). Simon set to work at once with characteristic thoroughness, and presented a series of annual and other reports to the City commissioners of sewers. They were unofficially reprinted in 1854, with a preface in which Simon spoke strongly of ‘the national prevalence of sanitary neglect,’ and demonstrated the urgent need of control of the public health by a responsible minister of state.[4] 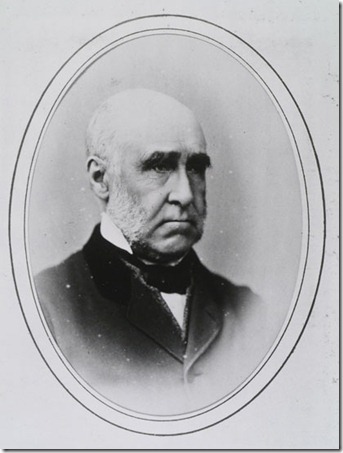 The general board of health was reconstituted in 1854, and by a further act of 1855 it was empowered to appoint a medical officer. Simon accepted the post in October 1855. The board was subject to successive annual renewals of its powers and the new office was one of undefined purpose and doubtful stability. Simon produced several valuable and comprehensive reports for the general board of health: on the relation of cholera to London water supply in 1856, on vaccination in 1857 and reports on the sanitary state of the people of England and on the constitution of the medical profession in 1858.[5] In 1858, the board was abolished, its duties being taken over by the Privy Council under the 1858 Public Health Act and Simon remained medical officer. The 1858 act was only made permanent in 1859 in face of strong opposition.[6] As medical officer of the Privy Council he instituted in 1858 annual reports on the working of his department, treating each year special subjects with broad outlook and in terse and graphic phrase. Between 1858 and 1871, Simon was implicitly trusted by his official superiors, was allowed a free hand, and rallied to his assistance a band of devoted fellow-workers, who helped to make the medical department into an effective instrument for change.

Much of Simon’s work was deeply affected by the cholera outbreaks of 1848-1849 and 1853-1854 and like other reformers he saw the problems of the city as moral as well as material. From his appointment to the Board of Health in 1855 till he resigned in 1876, the emphasis of his work shifted to statistical investigation and exact scientific enquiry. His reports were of significant in developing state intervention in public health issues.[7] In 1857, Simon had published his Papers relating to the History and Practice of Vaccination. Ten years later the law was strengthened by a new act that both tightened procedures and providing ways of improving the vaccine.[8] In the Vaccination Act 1871, following a very serious smallpox epidemic, Boards of Guardians were required by law to appoint a paid vaccination officer. Other infectious diseases that the reports gave attention were smallpox, which re-appeared in 1865-1866, typhoid, scarlatina and diphtheria. There were studies of ‘industrial’ diseases like the lung conditions produced among miners, potters and steel-grinders. An ineffective Adulteration of Foods Act was passed in 1860, the precursor of more far-reaching legislation in 1872 and 1875, by which local authorities had to employ public analysts to test food. The Alkali Act 1863 was the first of a series of enactments to deal with acid gas pollution.[9] 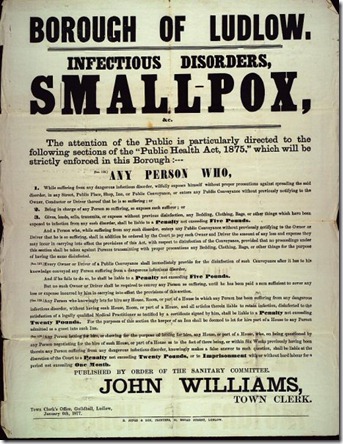 Simon’s eleventh report of 1866 considered the need to consolidate the different legislation and administrative agencies relating to public health. The solid foundation of scientific and medical knowledge that had not existed under Chadwick, meant that effective legislation was now possible. The threat of cholera helped produce the Sanitary Act 1866 that gave to local authorities increased powers to provide house drainage and water supplies. It provided stricter provisions for the removal of nuisances and additional powers were given to regulate communicable diseases. It made the specific duty of authorities to inspect their districts and to suppress nuisance and in case of failure to do this and upon complains being made, the Home Secretary had the power to send an inspector and, if neglect was established, to order the authority to act. Badly drafted as this legislation was, it included the vital principle of uniform and universal provision of sanitary protection combined with compulsory powers of enforcement on local authorities that formed the basis for the administrative reforms of the 1870s.

In August 1871, following the report of the Royal Commission on sanitary conditions, the Poor Law Board, the Local Government Office of the Home Office and the medical department of the Privy Council were amalgamated to form a new department, the Local Government Board. Simon became its chief medical officer in the belief that his independent powers would be extended rather than diminished. But neither Sir James Stansfeld, president of the board, nor Sir John Lambert, organising secretary, were prepared to accept Simon’s administrative independence. He protested in vigorous minutes and appeals that were renewed when George Sclater-Booth became president in 1874. After a fierce battle with the Treasury, his office was ‘abolished,’ Simon retired in May 1876 and the cause of scientific sanitary progress was prejudiced by his retirement.[10]

Practical reforms took a long time to implement and the medical and scientific work, associated with Simon, was reduced in the 1870s. The new Local Government Board was dominated by the old Poor Law officials and they took a different view from Simon keeping the medical scientific view out of policy-making in favour of the administrative principles inherited from the Poor Law. The result during the 1870s and 1880s was legislation that either established administrative structures or consolidated existing legislation. In 1869, the Liberal Prime Minister William Gladstone had set up a Royal Commission to look into sanitary laws and administration. It reported in 1871 and its recommendations were embodied in the Public Health Act 1872. The 1872 Act rationalised sanitary authorities throughout the country and made compulsory the appointment of medical officers of health. Finally, in 1875 a consolidating Public Health Act covered the whole field of public health, sanitation and nuisance prevention. It was accompanied by legislation in related fields: an act of 1875 regulating the sale of foods and drink; an act of 1876 on the pollution of rivers; in 1879 consolidating the law on contagious diseases in animals was consolidated; the Diseases Prevention Act 1883 no longer pauperised the recipient of treatment in hospital with infectious diseases; and, the Infectious Diseases Notification Act 1889 persuaded a large number of local sanitary authorities to establish isolation hospitals, a situation extended into rural areas by the Isolation Hospitals Act 1893. 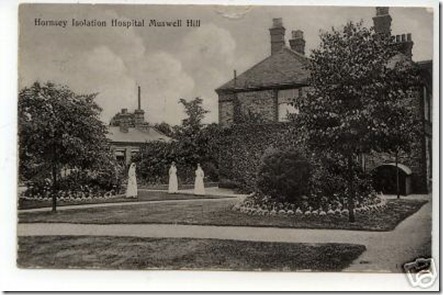 The early phase of public health reform was dominated by Edwin Chadwick, the later phase by Sir John Simon. Both left office disillusioned by their inability to implement reforms in the ways they wished. Paradoxically Chadwick resigned because of criticism of too much central control and Simon because of too little. In some respects, the parameters of the public health debate had shifted by the early 1880s. National administrative structure and enforcement agencies were in place. Public attention, however, shifted to concentrate on the larger cities, particularly on London that, quite apart from its sheer size, suffered problems of its own. The issue became one of housing.