Peel is generally recognised as the founder of modern Conservatism. He saw the need for the Tory party to adapt itself after its disastrous showing in the 1832 General Election when 175 Tory MPs were elected out of the 658 MPs in the House of Commons. In successive elections in the 1830s, the Conservatives increased their support in the House of Commons eventually defeating Melbourne’s Whig government in 1841. 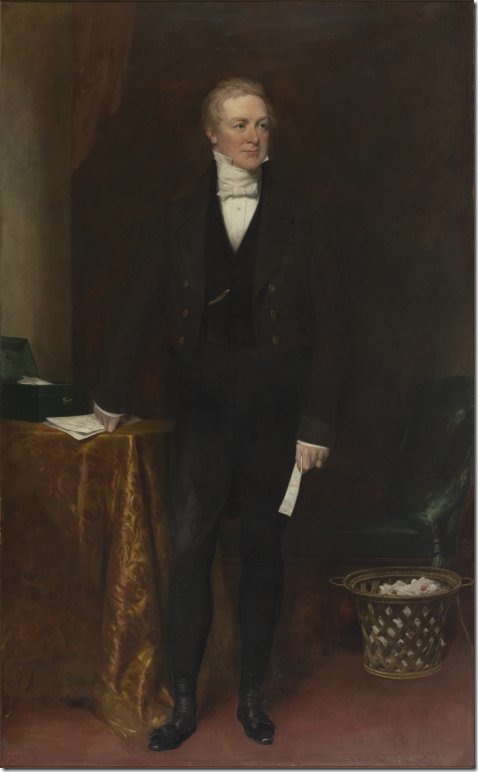 Peel was prepared to put the interests of the nation above those of the Tory party and on two occasions introduced policies that went against the basic tenets of Toryism. In 1829, he pushed through Catholic Emancipation against the wishes of the Protestant Tory majority and 17 years later, he ignored its belief in protection for agriculture by repealing the Corn Laws exposing divisions within the developing Conservative party.


How effective was Peel as a party leader in the 1830s?

In the 1830s, Peel was not a ‘leader of the opposition’ in its modern sense. He was not the official leader of the Tories until the end of 1834. Wellington led the Tories in the House of Lords and, as a previous Prime Minister was regarded by some as the Tory leader. Peel led the Tories in the Commons and was prepared to support government legislation when it was aimed at maintaining law and order. Considerable distrust existed between Peel and the ultra-Tories. They feared that Peel would betray the party, as they believed he had in 1829 over Catholic Emancipation. Peel, on the other hand, did not believe that the Ultras would act as part of a responsible opposition in Parliament and rejected their view that politics should be determined largely by the interests of English landowners.


When George IV dismissed Melbourne’s government in November 1834, he first turned to Wellington to form a new government. Wellington refused because he believed that Prime Ministers must carry authority in the House of Commons. The King then appointed Peel. Peel did not become Prime Minister because he was leader of a party in the Commons; instead, his authority as leader of the Tories was the result of his appointment as Prime Minister by the king. This reinforced his view of the executive nature of government. Strong government, he thought, not only achieved more but also was preferred by the governed. This meant efficient administration to maintain public order in the interests of the country. His financial and commercial reforms in the 1840s were designed to promote public order as much as relieve the economic complaints of manufacturers and consumers. This same concern can also be seen in his Irish policies. His first loyalty was to the king, rather than to the Tory party. This was an important distinction and proved central to his decisions during the ‘Bedchamber crisis’[1] in 1839 and the crisis over the repeal of the Corn Laws in 1845-1846. Peel’s minority administration lasted just a hundred days ending in April 1835 after which the Conservatives returned to opposition.


In late 1832, the Tory party was in a demoralised state. Although the party had opposed parliamentary reform, there were nevertheless those who did not condemn the principle of reform entirely but believed the Whigs had gone too far. Unquestionably, there were die-hard opponents of reform among the Tories: the ultras-Tories in Lords and Commons, opposed parliamentary reform, municipal reform, church reform, factory reform and Poor Law reform. The clearest statement we have of Peel’s attitude to reform came in his response to the King’s speech at the opening of Parliament in early 1833: ‘He [Peel] was for reforming every institution that really required reform; but he was for doing it gradually, dispassionately and deliberately, in order that reform might be lasting’. Change, if necessary, must reinforce not undermine the Constitution and Britain’s governing elite. This was not designed to pacify the Ultras within the party


Peel was dedicated to good government by men of integrity. He believed that power should be held by an elite with the education and expertise necessary to act in the national interest. Public opinion had its place but Peel sought to find the proper balance between executive government and public opinion that he believed had been altered by the crisis over reform. Like most of his contemporaries, Peel was not a democrat. The ‘people’, he believed, did not have the necessary education or judgement to make central decisions and if Parliament surrendered to outside pressure, the quality of its judgements would be weakened and the interests of the nation jeopardised.


Peel’s achievement in the 1830s was to make the Tory party more relevant to a changing society. He recognised that staying in opposition would not restore the fortunes of the Tories and that it was necessary to alter the widely-held view that the Tory party was reactionary and supported by only a small part of the population. To do this, Peel needed to broaden support for the party amongst the newly enfranchised urban middle-classes and rekindled support among the landed interest who had voted Whig in the 1832 General Election. He did this by linking the interests of all property owners--whether landed, industrial or commercial--firmly to the necessity of public order through the maintenance of the existing Constitution.


His appointment as Prime Minister in 1834-1835 gave him the opportunity of making his position clear to the new electorate in the Tamworth Manifesto of December 1834.[2] Peel used the manifesto to make his position on three issues clear to the nation. He maintained that it was essential to broaden the appeal of the Tory party and the manifesto contained a direct bid for uncommitted middle-class voters.

‘I gladly avail myself also of this, a legitimate opportunity, of making a more public appeal -- of addressing, through you [his own electorate in Tamworth], to that great and intelligent class of society of which you are a portion, and a fair and unexceptionable representative -- to that class which is much less interested in the contentions of party, than in the maintenance of order and the cause of good government’.


Peel was also anxious to emphasise that he accepted the Reform Act and that there would be no attempt to reverse the changes already made by the Whigs. He committed himself and his party to moderate reform where there was a strong case for it. This was designed to gain the support of the middle-classes who wanted further reforms.

‘I consider the Reform Bill a final and irrevocable settlement of a great Constitutional question -- a settlement which no friend of the peace and welfare of this country would attempt to disturb, either by direct or insidious means..... But if the spirit of the Reform Bill implies merely a careful review of institutions, civil and ecclesiastical, undertaken in a friendly temper, combining, with the firm maintenance of established rights, the correction of proved abuses and the redress of real grievances -- in that case, I can for myself and colleagues undertake to act in such a spirit and with such intentions...’


Finally, he made his support for the Church of England clear, essential if he wanted the cooperation of the Ultras but was prepared to support reform of its abuses.


‘Then, as to the great question of Church reform…I cannot give my consent to the alienating of Church property, in any part of the United Kingdom, from strictly Ecclesiastical purposes [he opposed lay appropriation] …With regard to alterations in the law which govern our Ecclesiastical Establishment.... It is a subject which must undergo the fullest deliberation and into that deliberation the Government will enter, and with the sincerest desire to remove every abuse that can impair the efficiency of the Establishment, to extend the sphere of its usefulness and to strengthen and confirm its just claims upon the respect and affections of the people.’


The Manifesto was too liberal by some but the majority of the Ultras went along with Peel.


Throughout the 1830s, Peel sought to broaden Tory support in the country and convince dissidents within the party that he had taken account of both their interests. This was accompanied by the gradual introduction of the term ‘Conservative’ in place of ‘Tory’. Tories believed in the uncompromising defence of the privileges enjoyed by institutions connected to the Anglican landed interest while Conservatives accepted the need for gradual and cautious change designed to reconcile those institutions with the needs of the modern world. The strategy of reforming to conserve, Peel believed, was an effective way of preventing radical reformers who threatened to erode or even destroy the traditional ruling institutions of the country. Conservatism may be seen as an extension of the ‘liberal’ Tory administrative reforming impulse of the 1820s.
[1] A close relationship grew up between the young Victoria and Lord Melbourne after she became Queen in 1837. This was exploited in the ‘Bedchamber crisis’ of 1839. In May 1839, the Whig majority was reduced to five and Melbourne decided to resign. The Queen, however, refused to accept Conservative ladies in waiting rather than her existing Whig ladies. Peel regarded this as a matter of principle and refused to form a government under such circumstances. Melbourne returned to office for a further two years.[2] The Tamworth Manifesto was an address by Peel to his constituents at Tamworth. On taking office, he was legally required to seek re-election but it had been approved in advance by the cabinet and sent to leading London newspapers for publication on 18 December 1834.

Posted by Richard Brown at 09:31 No comments:

Email ThisBlogThis!Share to TwitterShare to FacebookShare to Pinterest
Labels: Britain 1780-1850

When Sir Vince Cable, having criticised the government for not clamping down on offshore tax havens trading under the British flag, added ‘The Paradise Papers suggest that a small number of wealthy individuals have been able, entirely legally, to put their money beyond the reach of the Exchequer’, he was making what is the single most important thing about this situation.  UK’s tax law allows the use of offshore tax havens.  It may be galling for the rest of us who, as John  Macdonald said this morning, go to work and pay our taxes and who cannot afford to pay for the skills of tax lawyers and accountants to massage our tax returns.  You have to ask yourself the question…if I was rich enough would I invest in legitimate overseas funds to avoid paying tax?  You might like to take the moral high-ground and but the answer is that you probably would.

The HMRC has a commendable record of getting people and companies to pay their taxes and has collected £160bn by tackling tax avoidance, evasion and non-compliance since 2010. Jeremy Corbyn has suggested the Queen, among others, should apologise for using overseas tax havens if they were used to avoid taxation in the UK.  The Duchy of Lancaster that manages royal finances has already said that it was audited and legitimate. He also said anyone putting money into tax havens for the purposes of avoidance should ‘not just apologise for it, but recognise the damage it does to our society’.  The difficulty is that if it is lawful for individuals to avoid paying taxes by using tax havens, why should you apologise for it.  You may well be a grasping, mean-spirited, amoral individual but if you can live with that and the ‘damage’ you rain down on society, then you are acting perfectly legally…your moral compass may be off by a mile but you’re acting within the law…so that’s alright then!!!
Posted by Richard Brown at 18:26 1 comment: