Richard Brown, Famine, Fenians and Freedom, 1830-1882, Authoring History, second edition, 2017, £20.37, paperback, ISBN 978-1540352231; Richard Brown, Three Rebellions: Canada, South Wales and Australia, Authoring History, second edition, 2016, £19.72, paperback, ISBN 978-1539455707
The opportunity to revise and update the original texts as both these publications move into their second editions testifies to the success of previous print and electronic editions in helping to create markets for some of the less well trodden pathways of modern British and world history which have rarely featured so prominently in texts aimed at students in tertiary and higher education. In both instances the significance of the selected themes is succinctly explained in new prefaces. The new edition of Famine Fenians and Freedom, 1830-1882 takes its overall length from 582 to 602 pages and is now offered as the second volume of a quartet on resistance and rebellion in the British Empire. It examines the Irish dimension in Britain’s Empire through attempts especially by Young Ireland and the Fenians to achieve Irish independence through rebellion and by the populist and parliamentarian constitutionalist Repeal association and campaign for Home Rule to the achievement of devolved government. The book looks at the nature and impact of the Great Hunger in its global context in Britain, the United States, Canada and Australia and explains why, how and whither the Irish emigrated and how they settled into their new communities. The cover features Fenians at the Battle of Ridgeway in 1866, a victory, which the accompanying text argues ‘occurred too late to have any significant effect on the Confederation process’ though ‘it did play a major role in emotionally connecting the Canadian public to the idea of Canada’. However, the reader is warned in a cryptic caption that the book’s cover illustration amounts to a far from accurate depiction, though it might have helped some readers had this intriguing caption been elaborated and more of its provenance been revealed. 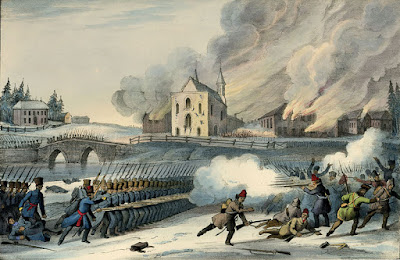 By contrast, the riveting cover illustration of the companion volume, focusing upon three rebellions in Canada, South Wales and Australia is extensively contextualised. Unusually, we discover, that it was painted by Katherine Jane Ellice, the daughter-in-law of the local seigneur, a prosperous fur trader, who was taken prisoner by the Patriotes at Beauharnois, near Montreal, in November 1838. Ellice described her captors as ‘the most Robespierre-looking ruffians, all armed with guns, long knives and pikes’. Their expressions and weapons are vividly captured in the watercolour. Moreover, Brown’s gripping account of the action and its significance is characteristically engaging and stimulating. He concludes that the rebellions in the Canadas, South Wales and Victoria were each a failure of popular constitutionalism to deliver political change and the unwillingness of the authorities to concede that change was necessary.
As the relationship of the United Kingdom with Europe and the wider world is re-defined post-Brexit, some of the global themes hitherto neglected but explored here with such insight, rigour and enthusiasm may perhaps again appeal to a widening readership.
John A. Hargreaves
Posted by Richard Brown at 11:04 No comments: