The most serious incident took place at Castlemaine in early May 1853 and was significant for several reasons: the unprecedented levels of violence used by the police, the reaction of the diggers, and the ineffectiveness of their representatives. [1] A party of police led by Inspector Christian raided the Mount Alexander Coffee House throwing out the sixty occupants (including women and children), dismantling the tents and impounding them and all their contents at the Government Camp.[2] The tents’ proprietors were thrown in the lock-up. The reason for the raid was that John Mangan, a Vandemonian policeman had informed Christian that illegal liquor was being sold there. In this case however, those arrested were respected citizens, the charges were dismissed the following day by the magistrates and Mangan arrested for perjury and convicted on 9 June. [3] The diggers reacted provocatively by drilling volunteer bodies of men and, perhaps because of this, ‘several gentlemen of station, wealth and influence’ immediately called a meeting. They were the business and professional élite from the town, individuals who would eventually become town councillors and who resented that control over both town and goldfield lay with officials in the Government Camp. About a thousand people assembled at four o’clock on Monday, 9 May on Agitation Hill. [4] ‘Professor’ Jackson, a phrenologist and Baptist preacher chaired the meeting. He had been an eyewitness to the police raid. Adams, keeper of one of the tents, was a member of his congregation and when he went to support Adams, had been threatened with arrest. Mr Hitchcock, auctioneer, then proposed a motion that: ‘…the whole of the district is so tyrannised over and disturbed, that this meeting declares its solemn belief that we are on the eve of a general revolution’. Dr William Preshaw [5] who had arrived in Castlemaine a year before supported:

The tyranny of the Government has been such that, unless people take steps to intercept a despotic invasion of their constitutional rights, the relentless and unscrupulous authorities would take further liberties...it now becomes an obligation with the residents on the diggings to be unanimous and not trampled on.

This was confrontational rhetoric demanding compensation and a change in police leadership in the area and was no longer simply protest by petition.

Three People’s Commissioners were appointed to present the meeting’s grievances to La Trobe and to demand immediate compensation for those who suffered the loss of property. The situation was defused, in large part through the deft handling of the Chief Gold Commissioner. Compensation was given, though Wright was accused by the People’s Commissioners of having bullied the victims into accepting lower terms.[7] Inspector Christian, who led the initial raid, was eventually transferred. [8] Jackson claimed to have met with La Trobe something the Governor denied in a despatch to London. La Trobe also hinted of financial irregularities in the conduct of one or more of the People’s Commissioners which, if true, may account for the subsequent weakness of the diggers’ movement in the Castlemaine area. [9]

That there were so few incidents, despite the provocative actions of those managing the goldfields, reflected the respect held for constituted authority by most diggers but La Trobe should have seen the warning signs. He did not recognise and remained unmoved by the fundamental inhumanity of the system seeing protest as the actions of a small minority of ‘agitators’, ‘people of no account’ or ‘foreigners’ though this was recognised in NSW:

The system of Government is barbarous, incompetent, wildly severe or else loosely inapt and ineffective—terrified with nightmare phantoms, or incapable of seeing danger where it really lies. Legislation in Victoria partakes of the same vices. Can it be expected that Government officials of any grade will escape this infection? [10]

La Trobe’s complacency was to be rudely challenged in the months ahead.

[7] ‘Mount Alexander’, Argus, 11 June 1853, p. 4, stated that three of the four claimants had settled with amounts ‘much smaller in amount than those which had been assessed’ since the government had already re-erected the destroyed buildings reducing the compensation paid and had refused to pay for any loss of business and that the claimants were willing to settled out of court.

[8] A further incident of pulling down tents of sly-groggers by Inspector Christian occurred later in May, Argus, 2 June 1853, p. 5. This drew comment from magistrates when they dismissed the case that Christian’s action was ‘highly censurable’ and from the Argus, ‘How is it that Mr. Christian's superiors tolerate such proceedings? If Mr. Christian has not common sense enough to discern right from wrong, why retain such a man in the service?’

Posted by Richard Brown at 09:42 No comments:

‘Revolutionary Chartists – From Whom May Heaven Protect Us’


‘Revolutionary Chartists – From Whom May Heaven Protect Us’  – Cambridge Independent Press, 12 January 1856.


If you had been alive in the Victorian period you would certainly have known who the Chartists were.  This was a national movement.  In towns and villages across Britain working people gathered to read the Northern Star, collect signatures for petitions, organise marches and tea parties, listen to speeches by ‘missionaries’, paste up posters. Almost nowhere was impervious to the Chartist campaign.  You couldn’t even travel on a railway train without a Chartist demanding the Northern Star from the newspaper seller.  Of course, you might have been one of these Chartists.  If you were a weaver or a frame worker knitter or a wool comber, chances are you were. The Chartists were everywhere, demanding a say in law-making for working men.  And long after they were gone, they will still remembered … and feared.  Little wonder that, as late as 1856, the editor of the Cambridge Independent was still shaking in his boots at a return of the Chartists.


The publication of Chartist Studies, edited by Asa Briggs, in 1959 launched a flurry of research into the Chartist localities.  Whatever William Lovett and his friends were up to in London was for the time being set aside.  What was going on in Sheffield, Norwich, Brighton and a host of other places was what mattered now.  In the Amateur Historian Dorothy Thompson issued a clarion call for local investigations, offering guidance on how to frame that research and on the sources  that could be consulted (That essay has recently been reprinted in THE DIGNITY OF CHARTISM).  And so articles in local history journals and M.A and Ph.D theses began to appear.  Small saplings soon became dense woods.  As the years passed, we learned more and more about Chartist activities in the localities.  The peak of all this local research was in the 1960s and 1970s, but it continued after that point until we reached the point where we now are:  there is no local Chartist stone undisturbed.


Anyone who wants to read all these articles and theses will need to lock themselves in the stacks of a university library for a fortnight and make very good use of inter-library loans.  The material is that scattered.  The good news is that such extreme measures are no longer necessary.  Happily, Richard Brown has embarked on a two-volume project to survey all the Chartist localities.  The first volume has just been published.  CHARTISM: LOCALITIES, SPACES AND PLACES, Volume 1 examines London, East Anglia, and the Midlands.  The rest of the country will be covered in the second volume, due next year.  The first thing to say about this first volume is that it is extremely detailed.  Anyone interested in what the Chartists in Suffolk or Worcestershire or Derbyshire will  almost certainly find the answers they seek.  A notable strength of Brown’s work is the depth of his research.  Whilst he has, of course, delved into the many essays that have been published about local Chartism, he has also returned to the primary sources, particularly newspapers.  This first volume is an extremely useful addition to the study of Chartism. It is thoroughly-researched, clearly-researched and, above all, very handy.

Posted by Richard Brown at 12:55 No comments: 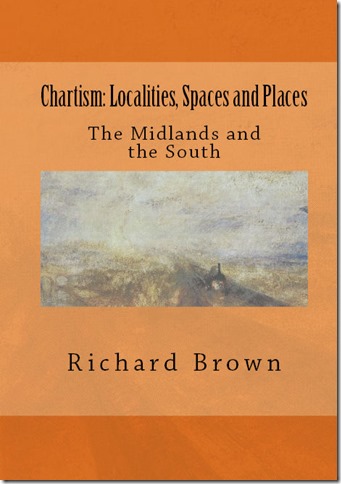 Posted by Richard Brown at 15:37 No comments: