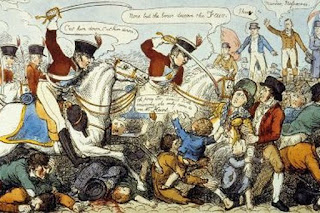 Jonathan Andrews, the Chief Constable, expressed the view that he would need military assistance given the crowd round the hustings. Hulton then sent two letters, one to the commanding officer of the Manchester and Salford Yeomanry and a second to Lieutenant-Colonel Guy L’Estrange, overall military commander in Manchester asking for support since he considered ‘the Civil Power wholly inadequate to preserve the peace.’ It was the Yeomanry that arrived first at about 1.40 pm. With instructions to escort Deputy Constable Joseph Nadin to the hustings with the arrest warrant, the militia set off down the narrow corridor formed by the Special Constables but quickly got bogged down by the crush. The Yeomanry, inexperienced in crowd control, panicked and began hacking the crowd with their sabres. Nadin reached the hustings and arrested Hunt, Johnson and several others but by this time matters were out of control. 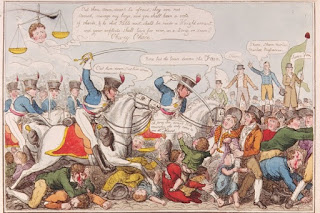 Thank you for a very useful contribution to a topic I am interested in: http://melbourneblogger.blogspot.com/2019/09/the-peterloo-massacre-in-manchester-1819.html

I could understand the events of the day, as tragic as they were, but I could not understand the later responses by local and national authorities. Nor could I understand why the government would not "give in" to so-called radical demands for parliamentary reform.