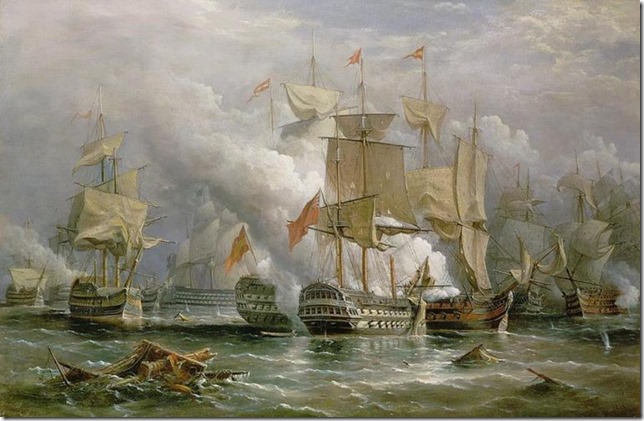 The Battle of Cape St. Vincent 14 February 1797
Napoleon Bonaparte persuaded the Directory of the merits of an attack on British power in India and in early 1798, French agents began to intrigue with the East India Company’s greatest enemy in southern India, Tipu of Mysore.[5] Napoleon invaded Rome and extinguished the freedom of Switzerland and, using his naval control of the Mediterranean, took Malta and defeated the rulers of Egypt. The military advantage that he had gained was eliminated by the destruction of the French fleet by Nelson[6] at Aboukir Bay (Battle of the Nile) in August 1798. 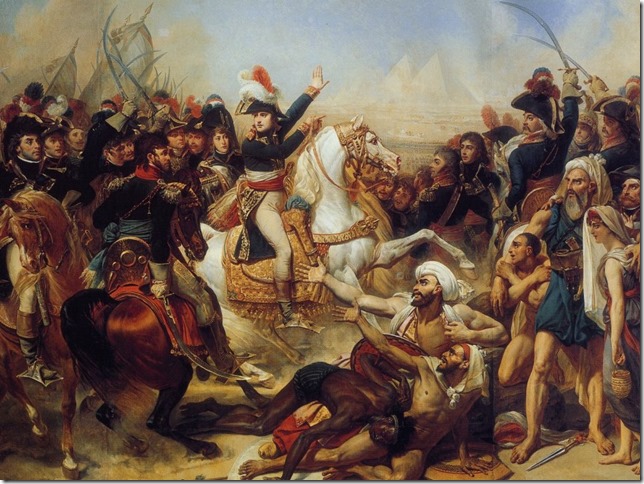 Battle of the Pyramids
The implications of Nelson’s victory were far-reaching. The French lost their naval supremacy in the Mediterranean and their army was stranded, though not actually defeated until 1801. Tipu was defeated and killed at Seringapatam in 1799 and the territorial power of the East India Company extended. In Europe, the failure of the Egyptian expedition encouraged those states with grievances to show their hand. The Ottoman Empire declared war on the invaders of their Egyptian province. 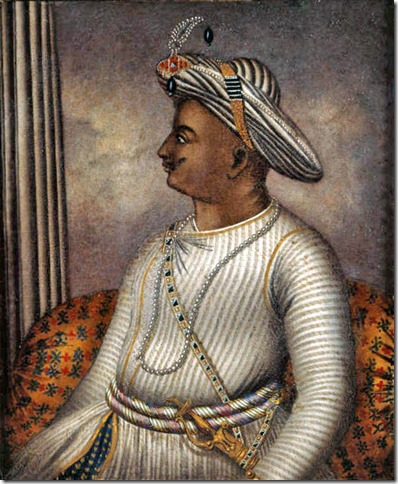 Tipu Sultan of Mysore
The Second Coalition 1798-1801
Coalition warfare was the only way to achieve outright victory and end French expansion. The experience of the First Coalition showed how difficult this was going to be. Lord Grenville reassembled a Second Coalition against France. As with the First Coalition, early limited success was followed by disunity and defeat. Austria was defeated at Marengo and Hohenlinden in 1800 and made peace at Lunéville in 1801. Russia withdrew her support and during 1800. France cultivated good relations with Russia, Prussia and Denmark with a view to closing northern Europe to British trade. These moves threatened Britain’s domestic stability since poor harvests increased the importance of imports of Baltic grain. Retribution for the formation of the ‘Armed Neutrality of the North’ and the invasion of Hanover by Danish and Prussian troops was swift. In March 1801, the Danish fleet was destroyed by Nelson at anchor at Copenhagen, invading troops were withdrawn from Hanover and relations between Britain and Russia thawed. The consequences of the formation of the First and Second Coalitions were similar. In both 1797 and 1801, Britain was left isolated after France had successfully defeated the coalition armies and countries that lacked trust in each other. France’s grip on Europe had been gradually tightened. The British Navy had saved Britain from invasion in 1797 and had successfully defeated the navies of France, Spain, Holland and Denmark. It had secured Britain’s colonial possessions and enabled the conquest of enemy colonies in the West Indies, Africa, India and Ceylon. However, it could not defeat Napoleon in Europe and its success encouraged France to concen­trate more on its armies, thus increasing pressure on Britain’s allies. Sea power and land power had fought each other to a standstill, each dominant in its own sphere. A compromise peace was a logical option in 1801-1802 to give both sides breathing space. 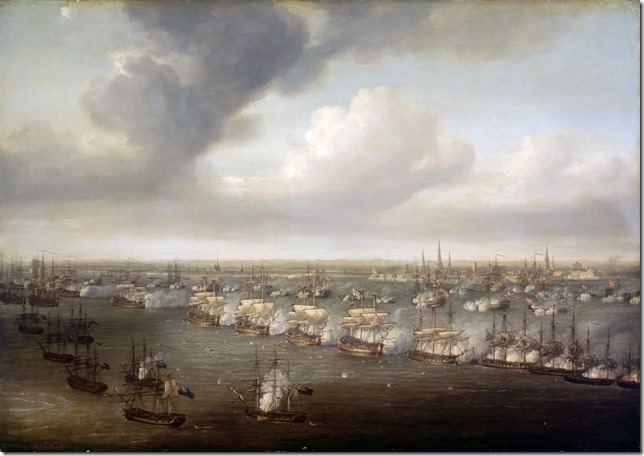 Battle of Copenhagen 1801
Was Pitt a good war leader?
Pitt had left office before the Treaty of Amiens of 1802. He fought the French between 1793 and 1801 much as his father would have done, using Britain’s naval supremacy to blockade Europe and pick off enemy colonies while subsidising allies to fight the land war. Yet, he has been dismissed as a ‘disastrous’ war leader. How true is this? In two respects, Pitt proved successful. He put national finances on a wartime footing through direct taxation rather than loans. He also showed considerable tenacity in pursuing the war. This was evident in 1797 when the First Coalition collapsed and Britain was alone. His actions established a sense of national purpose and raised levels of patriotism to new heights.
In other respects, he was much less successful. In 1793, Britain was unprepared for war and Pitt did not understand the need for more military and naval training. It took Pitt until 1795 to appreciate that this was going to be a long war. Pitt has been unjustly critici­sed for an indiscriminate and poor use of subsidies. Of the £66 million paid in subsidies between 1793 and 1815, only £9.2 million was provided before 1802. The lack of military success, which these bought, was a conse­quence of several things. Pitt’s concern to keep the Low Countries out of French control was not shared by members of the two coalitions, both of which were loose federations of distrusting states. Prussia was more interested in the Baltic than the North Sea and looked to the partition of Poland to pick up more territory. Austria wished to sever her connections with Belgium and consolidate her position in central Europe.
In addition, the French had superior armies, generals and tactics. The British commanders of the 1790s were, with notable exceptions like Nelson not particularly able and the British army was in no position to sustain a long continental campaign. In Europe, reliance on others was unavoidable. This led to the coalitions and they were very fragile. Pitt also faced conflicting advice from his chief ministers. Dundas favoured the colonial strategy. Grenville wanted a continental policy believing that France could only be defeated in France. Pitt could see the advantage of both strategies and failed to decide decisively between them. Pitt’s success as Prime Minister between 1783 and 1793 came largely from his control of events. This allowed him to take decisive, quick decisions. After 1793, his ability to control events was more limited and he often failed to give decisive leadership. He misjudged the military capacity of revolutionary France in 1793. Perhaps the best thing that can be said about Pitt’s leadership is that at least Britain had not been defeated by 1802.
The cost of war
The war was expensive for Britain and ended Pitt’s economic reforms. He was hesitant about pushing up taxes and relied heavily on borrowing to finance the war that increased from £4.5 million in 1793 to £44 million by 1797. The effect was inflationary and in 1797, following a run on the banks occasioned by the French landing at Fishguard, the government authorised the Bank of England to suspend cash payments and to issue notes for small denominations (£1 and £2). Inadvertently Pitt had stumbled upon one aspect of successful wartime fiscal policy. It was not until he announced his proposals for an income tax in 1798 and its collection in 1799 that Pitt pursued other aspects of wartime fiscal policy. This graduated tax was a logical, if unpopular, solution and was only accepted on the understanding that it was a temporary wartime expedient. It raised about half the £10 million Pitt had hoped to raise annually and one explanation of the support for the negotiations leading to the Peace of Amiens between 1801 and 1802 was the belief that income tax would be abolished. Wartime ministers, especially if they do not provide outright victory, have rarely been seen as successful. Pitt may well fall into this category. However, to condemn him outright as inadequate fails to acknowledge his appreciation of the commercial implications of the war, the advantages that colonial conquests were to bring and the naval supremacy for which his reforms in the 1780s and early 1790s had laid the foundations. War was a necessity forced upon Pitt, who needed to make commerce and constitution secure. [1] The First Coalition against France was signed in February 1793. It consisted of Britain, Austria, Prussia and Holland. Spain and Sardinia also entered the coalition strengthening Pitt’s belief that the war would not last long.[2] The Second Coalition consisted of Britain, Russia, Austria, Turkey, Portugal and Naples and proved to have even fewer unifying features than the first.[3] Britain had fought a long war with France for dominance in India culminating in the battle of Plassey in 1757 when Robert Clive defeated a combined Indian-French army. Some French settlements remained though they were quickly taken in 1793-1794.[4] The Caribbean was always a graveyard of troops and seamen largely from malaria and yellow fever. Between 1793 and 1801, the British army sent 89,000 men to the Caribbean and lost 70 per cent of them. The total loss for army, navy and transport crew was probably over 100,000.[5] Tipu ‘the Lion’ of Mysore was the cruel, yet enlightened ruler of Mysore. He was strongly pro-French.[6] Horatio, Lord Nelson (1759-1805) was the most successful and popular naval figure during the war. His victories at Aboukir Bay in 1798, Copenhagen in 1801 and Trafalgar in 1805 played a central role in preserving British freedom. His death at Trafalgar achieved mythic proportions.

Email ThisBlogThis!Share to TwitterShare to FacebookShare to Pinterest
Labels: Britain 1780-1850