War or War Plus?

Let’s be clear we are already at war with IS and in bombing in Iraq, as well as killing terrorists, we have already almost certainly killed civilians.  Extending that war to Syria is a logical extension across a border that IS does not recognise.  In doing so we will again kill terrorists in the consequent bombing and again almost certainly civilians.  It makes no military sense to stop at the border especially as Britain is already doing reconnaissance flights over Syria.  Is it, as Liam Fox suggests a  ‘national embarrassment’ for Britain to ‘contract out’ our security to our allies?  It all depends where our national interests lie.  Was it right for David Cameron to call those opposed to intervention in Syria as ‘terrorist sympathisers’ David Cameron, something that has not as yet apologised for?  Certainly not, IS is a despicable regime, something even those opposed to war recognise and the issue for them is not one of appeasing IS but with finding a long-term solution to the problem they pose to democratic institutions in the Middle-East  but also in the West. 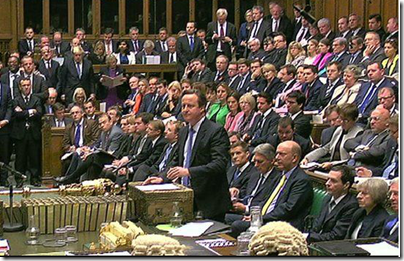 Has the Prime Minister made the case for war?  Barely, I think.  Public opinion, if the poll in today’s Times is to be believed is not behind him—though it must be said considerably more behind him than in 2013.  There are also divisions in both Conservative and Labour parties over the question though it is probable that the numbers are with David in Parliament: he would not have risked a vote unless he was fairly confident of winning.  Bombing won’t defeat IS, something recognised by both sides and that ultimately means that ground troops will ne needed.  It is this issue that concerns MPs on both sides of the argument though it is specifically excluded in today’s motion.  Where will these troops come from?  The Prime Minister banded about the 70,000 local troops available to assault IS but this was certainly a case of smoke and mirrors. There may well be 70,000 combatants opposed to IS in Syria, Iraq and Turkey but they are not a coherent force but merely bands of fighters often with diametrically opposed aims, that could be brought to bear on IS.  An effective attack on IS requires coordinated attacks with air power and ground troops working together to push IS back and currently this does not exist.  We have all seen the consequences of previous western ‘crusades’ against states, such as Iraq and Libya whose leaders we disapproved of…we have removed strong despicable leaders only to see them replaced by strong, despicable terrorist groups.  We’re very good at getting rid of ‘bad’ men but we are appalling at finding a stable replacement…now that’s a real ‘national embarrassment’!

Will extending bombing make Britain safer?  Probably not.  Will bombing destroy rather than simply degrade IS?  Certainly not?  Is there a coherent policy for dealing with IS globally?  There needs to be…lots of words certainly but definitely not.