I’ve been preparing books for Stephen Roberts for publication in his Birmingham Biographies series over the past year.  The complete series (so far) is list on my website.  This is Stephen’s most recent book, published today, that explores letters sent to the editors of Birmingham’s newspapers during the nineteenth century. 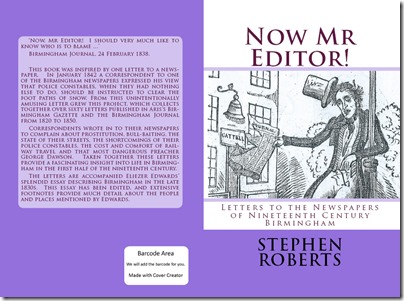 ‘Now, Mr Editor!  I should very much like to know who is to blame …’

This book was inspired by one letter to a newspaper.   In January 1842 a correspondent to one of the Birmingham newspapers expressed his view that police constables, when they had nothing else to do, should be instructed to clear the foot paths of snow. From this unintentionally amusing letter grew this project, which collects together over sixty letters published in Aris’s Birmingham Gazette and the Birmingham Journal from 1820 to 1850.  Correspondents wrote in to their newspapers to complain about prostitution, bull-baiting, the state of their streets, the shortcomings of their police constables, the cost and comfort of railway travel and that most dangerous preacher George Dawson.  Taken together these letters provide a fascinating insight into life in Birmingham in the first half of the nineteenth century.

The letters are accompanied Eliezer Edwards’ splendid essay describing Birmingham in the late 1830s.  This essay has been edited, and extensive footnotes provide much detail about the people and places mentioned by Edwards.