Shaping a historiography: a mythic beginning

In 1916, Ernest Scott, newly appointed professor of history at the University of Melbourne, concluded his highly influential A Short History of Australia with a discussion of Australia’s novelists and poets. In the final paragraph of the book, he observed

Perhaps not many of the writings of these men are well known outside Australia; but what of that? She has her own life, and it is good; they wrote for her about the things that are hers; and they have helped her people to understand their country, their destiny, and themselves.[1]

Scott might have provided a similar commentary of the ambitions of Australia’s historians, across the twentieth century, to create and contest a mythic narrative of national experience. European national histories

…showed a remarkable zeal in demonstrating the uniqueness of their particular nation-state; a similar zeal in Australian national histories was intensified by a strong sense of insularity as a federation of colonies finding its path to nationhood in a region distant from comparable western nations.[2]

Australians defensively withdrew from the Asia-Pacific region in the name of economic growth and white cultural destiny. Looking inward, the national narrative attempted to discover the sources of Australian character from within a culture that could proudly acknowledge its British origins, while searching for evidence of its unique character. 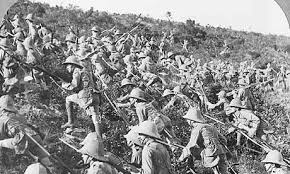 This introduction considers twentieth century Australian national histories that have embraced or challenged myths of national identity and nation building from the interpretations of an evolutionary Australian-British liberalism and progress typified by Ernest Scott in the period between the two world wars, to the mid-century assertions of a culturally distinctive Australian nationalism, and the intensely competitive revisionism over issues of national identity, race and gender in recent decades. Successive generations of Australian historians have grappled with the themes of ‘mateship’ and ‘egalitarianism’, White Australia, and masculine struggles of progress and sacrifice in war. During the first half of the twentieth century, many Australian historians cultivated the status of these mythic themes in shaping what Margaret Somers has described as a ‘meta-narrative’: a myth of national identity.[3] From the late 1960s, this project, serving the needs of homogenous nation building, was challenged by a more critical analysis of the evolving nation, as the economic and cultural protectionism that had characterised Australian society since federation in 1901 began to break down under the influence of post-war immigration and the liberalisation of the economy.

Myth is a highly charged concept to link with the study of history: as Rebecca Collins observes, ‘myth and history are typically construed as antithetical approaches to the past’. To suggest that fable and fact may be reconciled to explain the past is to apparently suggest that truth and falsity can explain the same historical event.[4] Yet, myth cannot be so easily dismissed from a consideration of history, particularly from histories of nations and national identity. All histories contain some element of myth especially some sort of ‘creation story’[5], a distortion of the truth produced to draw out a significant explanation of the past; a sense of significance shared by a cultural group embracing a mythic explanation of the past in order to reinforce shared values. Historians write to communicate with contemporary audiences and Collins concludes that all history writing is concerned with the political problems of the present.[6]

[4] The distinction between fact and fable was far less problematic for medieval historians. Take, for instance, the writings of Dudo of St Quentin and their importance in establishing the ‘Norman identity’ in the early eleventh century; see, Webber, Nick, The Evolution of Norman Identity 911-1154, (Boydell), 2005, pp. 1-53.