The industrial revolution cannot be viewed as a simple transition from an agricultural and domestic economy to one dominated by factory regimes but rather as a restructuring of economy and society. For individual workers this meant the abandoning of old skills as well as the development of new ones, while increasing regional specialisation of industry created differing impacts from one locality to another. Although contemporaries placed considerable emphasis on the development of large-scale factory production, domestic production and small workshops dominated manufacture until the mid-nineteenth century.

The dreadful fate of 17 children who fell unhappy victims to a raging fire at Mr Atkinson’s factory at Colne Bridge, February 14th 1818.

All the dead were girls; the youngest nine, the oldest eighteen. The fire started when about 5 am a boy aged ten was sent downstairs to the ground floor card room to collect some cotton rovings. Instead of taking a lamp, he took a candle that ignited the cotton waste and the fire spread quickly through the factory that became a raging inferno. The children were trapped on the top floor when the staircase collapsed. The entire factory was destroyed in less than thirty minutes and the boy who had inadvertently started the fire was the last person to leave the building alive. It is not surprising that child labour and the need to regulate it became a national issue in the early 1830s.[1] 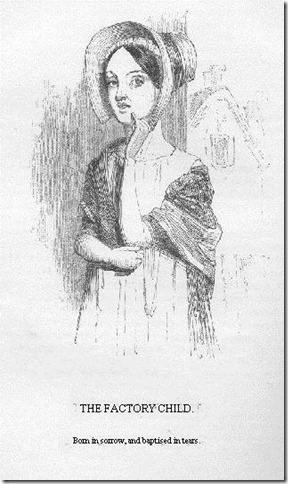 Technological change and the development of new work conditions had gained sufficient strength by the 1830s to necessitate a serious and sustained effort by the state to regulate their application. [2] Both employers and workers believed themselves locked into an established system of attitudes, actions and responses. Employers regarded their position as defined by the laws of the free market over which they had little control. Insensitive, repressive and largely indifferent to the conditions of their workers, many were motivated by a belief in profit, a belief buttressed by their religious piety. Widespread drunkenness among the workforce, as escape from these pressures, seemed to confirm employers’ belief that the workforce could and would not respond to better treatment. These attitudes percolated down into the workforce itself and there is ample evidence of the exploitation of and cruelty towards workers, especially children, by fellow workers.[3] Masters and workers had been related to each other by simple contract and face-to-face contact but industrialisation had created a new set of relationship patterns. Workers had become ‘operatives’, human extensions of new technology, ‘dehumanised’ and ‘dehumanising’. 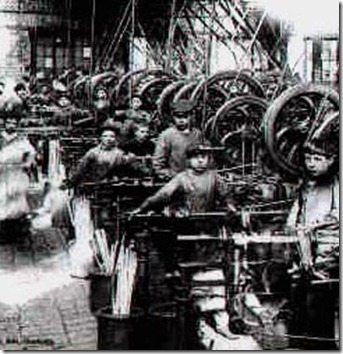 By no means were all factories similar and there was a wide range of work experience within any one factory unit. Many late-eighteenth and early-nineteenth century textile mills were rural and recruited labour from the local domestic industries. Families often moved together to a new factory so that all members of a household could gain employment. A weaver used to the workings of a small weaving shed would be familiar with many aspects of the work environment, if not the scale, of a factory. Boys would probably be apprenticed to weaving, power spinning or in the machine shop; girls might work in the carding room before moving to other low-technology jobs within the mill. Generally, as new technology was adopted, men took control of the new processes in spinning and weaving while women were left with the older machines and more poorly paid jobs.[4]

Increasingly, as factories moved to steam-powered sites, the labour force moved from rural mills to towns. The new large urban mills offered greater opportunities and a wider range of employment in towns was some insurance against recession and unemployment. But factory work altered labourers’ lives in a variety of ways. Most obvious was the loss of freedom and independence, especially for men who had previously been their own masters. Factory workers could no longer intersperse industrial work with agricultural labour or other activities. Many factory masters introduced rigid and draconian regulations to keep the workforce at their machines for long hours and to break their irregular work patterns.[5]

[2] The shortest introduction to factory reform is Henriques, U., The Early Factory Acts and their Enforcement, (The Historical Association), 1971. Ward, J.T., The Factory Movement 1830-1850, (Macmillan), 1962 is the most detailed study though it has, in part, been superseded by Gray, R., The Factory Question and Industrial England 1830-1860, (Cambridge University Press), 1996. Driver, C., Tory Radical: A Life of Richard Oastler, (Oxford University Press), 1946 and Weaver, A., John Fielden and the Politics of Popular Radicalism 1832-1847, (Oxford University Press), 1987 are useful biographies. Ibid, Finlayson, Geoffrey, The Seventh Earl of Shaftesbury 1801-1885 is a detailed biography that contains much on factory conditions. Nardinelli, Clark, Child Labour and the Industrial Revolution, (Indiana University Press), 1990 examines the most contentious of the questions surrounding factory conditions. Ward, J.T., (ed.), The Factory System, 2 Vols. (David & Charles), 1970 contains primary material.

I think this is among the most significant information for me.

And i am glad reading your article. But want to
remark on some general things, The website style is great,
the articles is really great : D. Good job,
cheers

Here is my web-site: PAYDAY 2 trainer

YOU ALWAYS PROVIDE NICE INFORMATION OF HISTORY THAT IS NOT EASY TO GET OUTSIDE .........
commodity tips free trial