In 1830, popular culture was public, robust and gregarious, largely masculine and involved spectacle and gambling with an undercurrent of disorder and physical violence. The distinction between high and popular culture, between opera and drama on the one hand and spectacle, circus and showmanship on the other had broken down: Shakespeare, melodrama and performing animals not merely co-existed but intermingled.

The eighteenth century pleasure fairs had played a major role in this process and many major actors started their careers in their theatrical booths. English theatre and opera was produced not only for the cultivated and informed but for mass audiences for whom melodrama, lavish stage sets and live animals were essential and whom managers and actors bored at their peril. Expanding audiences funded the extensive rebuilding of Covent Garden, Drury Lane and Sadler’s Wells as well as theatres outside the West End and entrepreneurs gave melodrama a legitimate place on the stage as well as developing the modern pantomime. Provincial theatres followed the example of London. [1] By 1830, however, there had been some decline in theatre going among the provincial bourgeoisie, the result as much of the rougher audiences frightening them away as the impact of evangelicalism.

Developments in sport showed the same commercialism and capacity to survive in the face of the hostility of authority. [2] Shooting and hunting were the only sports to remain exclusively elitist. Until 1831 shooting was legally restricted to owners of land worth more than £100 and the Games Laws ensured that poaching was severely punished. [3] While shooting demonstrated a horizontal cleavage in rural society, foxhunting had a far greater community interest. Though dominated by the landed aristocracy and country gentlemen, it was open to urban gentry and professionals and the poorer sections of the community followed the spectacle on foot. Some hunts were the property of single great landowners but were expensive to maintain and subscription hunts became more common: there were 69 packs of hounds in Britain in 1812, 91 by 1825. [4]

Horseracing was the sport of both the rich and poor. It could not maintain its exclusiveness though different prices charged for the stands, the paddocks and the ordinary enclosures were as much an expression of social hierarchy as different class of railway travel. Horseracing combined two obsessions: the love of horses and gambling. Professional bookmakers appeared around 1800; by 1815, the ‘classic’ races, the Derby, the Oaks, the One Thousand and Two Thousand Guineas, the St Leger and the Ascot Gold Cup, were all established and by 1837, there were 150 places in Britain where race meetings were held. [5] By 1850, off-course betting had been established, further broadening participation.[6]

Pugilism or prize fighting began as a sport of the labouring population and attracted aristocratic patronage by 1800. Like horseracing it was increasingly commercialised and its champions such as Tom Spring, [7] Tom Crib and Dutch Sam were full-time professionals. Both flourished as industries with their own specialist newspapers yet they were also evocative of an older, perhaps imaginary, culture where sporting squires and labourers rubbed shoulders in a common appreciation of animals and physical prowess. Upper-class support for prize fighting waned after 1830 but it retained its popularity among the working population and its real decline did not occur until after 1860.[8] Other sports like cricket, rowing and pedestrianism had similar characteristics to horse-racing and prize fighting.[9] They became more organised and professional, more dependent on attracting spectators and accompanied by extensive gambling. Cricket originated as an activity of the labouring population in southern England and was then take up by the aristocratic elite.[10] Pedestrianism and rowing also began as popular sports before moving up the social scale late in the nineteenth century. [11]

Many traditional customs continued until well after 1850. There is evidence for the large unchanged New Year mumming festivals in northern England until the 1870s. Guy Fawkes’ Night was still celebrated despite attempts by various authorities to suppress bonfires and the burning of effigies. [12] Changes to traditional customs were not easily enforced even in areas, like Lancashire, where factory discipline was most firmly established. The Lancashire Wakes Weeks, traditionally the most important event of the recreational year, were forced on mill-owners rather than freely given. [13] It was not simply employers who attacked wakes and fairs. Moral reformers, the magistracy, and later the police recognised that these acted as a focus for criminal activity, could potentially lead to violence and threatened public order. That they continued until the late-nineteenth century was due not to lack of opposition but to disagreement about what action to take.

By 1830, a clear distinction was apparent between the nature of much popular recreation and the dominant intellectual movements of the day, rational liberalism and evangelicalism with their argument for a self-conscious and moralistic cultivation of respectability. This produced much of the impetus for reform. From the formation of the Proclamation Society in 1787, the campaign for reform gathered momentum. By the 1830s, there were societies for preventing cruelty to animals, the Lord’s Day Observance Society founded in 1831 and the British and Foreign Temperance Society. Parliamentary reform in 1832 gave such societies slightly more influence over Parliament and as the police force extended they gained the means to enforce legislation. Betting was an early and obvious target for reform but lotteries were not made illegal until 1823 and 1825 and further measures to discourage gambling had to wait until the 1840s and 1850s. [14] Reform was not achieved easily, quickly or completely. Neither was it the prerogative, nor was it dictated by the interests, of any one social group. It traversed class boundaries, dividing all groups, especially the working-classes, internally.[15]

The late-eighteenth and first half of the nineteenth century saw two major changes in the cultural experience of English society. [1] First, there was erosion of the older popular culture as a result of the withdrawal of patronage by the governing elite, the gradual dismantling of the agrarian social and economic frameworks that gave it justification by widespread industrialisation and the attacks on its public expression by a combination of religious evangelicalism and a secular desire to promote work discipline. By contrast, secondly, a more commercial culture developed, entrepreneurial, market-led and largely urban and bourgeois. This involved modification of both the content and transmission of high culture and, in the nineteenth century, the promotion of popular cultural products like circuses, prize and cock-fights for profit. Cultural experiences, like economic and social ones, were adaptable.

The attack on popular culture was part of the assault on the life-styles and recreations of the labouring population that had been gathering pace since the sixteenth century. [2] It had two linked thrusts: a religious belief that popular culture was profane, irreligious and immoral and a secular concern that it was detrimental to economic efficiency and public order. The desire to turn people into sober, virtuous and godly citizens motivated by an interest in work and social discipline is generally held to have been resolved by the mid-Victorian turn to recreation and sport, ‘justifying God to the people’ through the ‘soft-hearted benevolence’ of cricket, cycling and football. 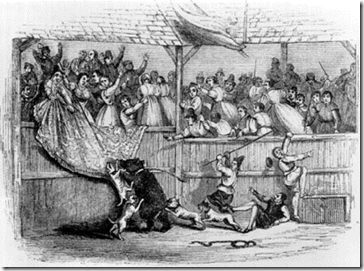 Bair-baiting in the seventeenth century: engraving, 1796

However, Dominic Erdozain argues that the problem of pleasure was inflamed by the ecclesiastical remedy. Just as the early Victorians came to identify sin with ‘vice’, their successors came to associate salvation with an increasingly social and physical sense of ‘virtue’. The problem of overdrawn boundaries between church and world gave way to a new and subtle confusion of gospel and culture resulting in a sense of cultural crisis, a challenge to the hegemony that called for moral regeneration and stricter disciplining of the lives of the labouring population. Historians have praised the mood of engagement and adaptation but the costs were profound. Sport came as an invigorating tonic but it could neither sustain its new patrons nor fulfil their missionary task. Instead, it became the perfect vehicle for that humanistic, ‘unmystical’ morality that defines the secularity of the twentieth century. [3]

Attacks on popular culture after 1830 can therefore be seen as a response to pressures on existing forms of social control, of demographic and urban growth and the consequent erosion of paternalism. Evangelicalism played a major role in this critique of popular culture and succeeded in obtaining some agreement across the governing elite to its central moral tenets through groups such as the Society for the Reformation of Manners and the Society for the Suppression of Vice. [4] Its views had their greatest success with the mercantile, commercial and professional groups, who looked with both economic and social distaste at the irrational and sinful nature of much popular culture and were appalled by the gratuitous cruelty to animals this involved. Methodism had greater impact on the working population and on artisans and small shopkeepers through its incessant attacks on the worldliness and sensuality of popular culture. Distaste for present pleasures was also a characteristics of secular radicalism. For articulate radicals, popular culture was too closely linked to the paternalistic social order. It offended their emphasis on reason and their stress on moral and intellectual self-improvement; books, education and debating rather than bear baiting, races and circuses. Secular radicals, no less than evangelicals, sought to redeem the working population.

This ideological attack was combined with what Thomas Carlyle’s ‘abdication on the part of the governors’. The aristocracy and gentry gradually withdrew from participation in popular culture and no longer championed it against reformers. Society was becoming less face-to-face, except on special occasions, with social groups confined to their own cultural worlds. The layout of country houses and gardens demonstrated a move towards domestic privacy. This was more than just symbolic and reflected a much broader ‘cutting-off’ of the lives of aristocracy and gentry from the lives of the labouring population. Rural sports, customary holidays and apprenticeship rituals came to be seen not as socially desirable but as wasteful distractions from work and threats to social order.

[3] On this issue see, Erdozain, Dominic, The Problem of Pleasure: Sport, Recreation and the Crisis of Victorian Religion, (Boydell Press), 2010.

Posted by Richard Brown at 10:45 No comments: