The Peace of Amiens, negotiated by Hawkesbury (later Lord Liverpool) and Cornwallis and ratified by Parliament in May 1802, received a poor press from contemporaries and subsequently from historians. The surren­der of Austria deprived Britain of any leverage in Europe and Addington accepted terms which recognised French predominance on the continent and agreed to the abandonment of all overseas conquests. Grenville and Windham regarded these concessions as a disgrace and refused to give the ministry further support. This opened a split between them and Pitt, who was still prepared to give Addington assistance. Viewed simply in territorial terms Amiens was disastrous but Addington and his ministers saw it as a truce, not a final solution. Britain had been at war for nine years and Addington, previously Speaker of the House of Commons, was fully aware of growing pressures from MPs and from the nation at large for peace. Canning, one of the most vehement critics of the Peace, willingly admitted that MPs were in no mood to subject its terms to detailed scrutiny and that they would have ratified almost anything. 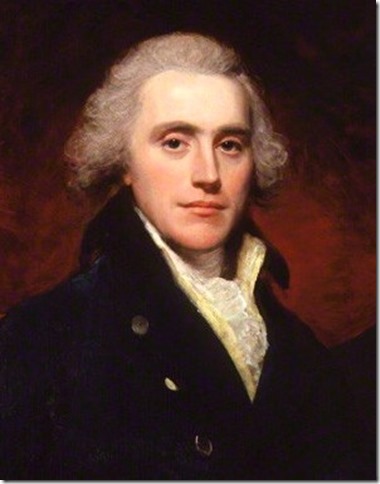 In the twelve months between Amiens and the inevitable renewal of the war, Addington made military and fiscal preparations that placed Britain in a far stronger position than it had been in 1793. British naval and military strength was not run down. The remobilisation of the fleet pro­ceeded well in 1803. Addington retained a regular army of over 130,000 men of which 50,000 were left in the West Indies to facilitate the prompt occupation of the islands given back in 1802 when the need arose. 81,000 men were left in Britain that, with a militia of about 50,000, provided a garrison far larger than anything Napoleon could mount for invasion in 1803. The 1803 Army of Reserve Act produced an additional 30,000 men. He revived the Volunteers, backed by legislation giving him powers to raise a levy en masse. This raised 380,000 men in Britain and 70,000 in Ireland and by 1804, they were an effective auxiliary force. Reforms by the Duke of York improved the quality of officers and in 1802, the Royal Military College was set up. Addington improved Pitt’s fiscal management of the war in his budgets of 1803 and 1804 by deducting income tax at source. This was initially set at a shilling and raised by Pitt in 1805 at 1/3d, in the pound on all income over £150. Fox, who bitterly denounced Pitt’s 25 per cent increase in 1805, had now to defend a further 60 per cent increase the following year. Once war was renewed in 1803, Addington adopted a simple strategy of blockading French ports. The navy swept French commerce from the seas. Colonies recently returned to France and her allies were reoccupied. He sought allies on the continent who were willing to resist French expansion. 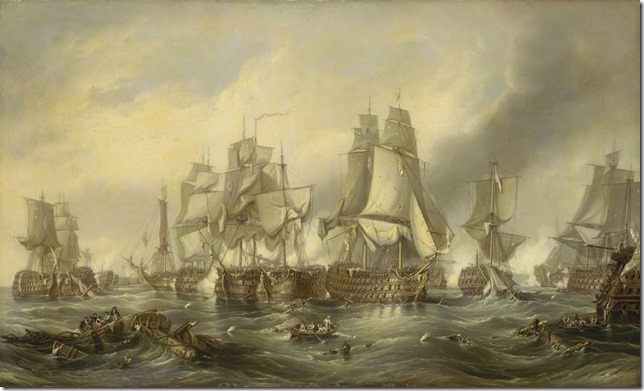 From 1803 until about 1810, there was little difference in Britain’s strategy to that employed in the 1790s or its level of success. Addington gave way to Pitt in April 1804. Napoleon recognised that final victory depended on the conquest of Britain and during early 1805, preparations were made for an invasion. To succeed he needed to control the Channel and to prevent the formation of a European coalition against France. He failed on both counts. The destruction of a combined Franco-Spanish fleet at Trafalgar in October 1805 denied Napoleon naval supremacy and the hesitant moves of Russia and Austria against him meant that troops intended for invasion had to be diverted. Between late 1805 and 1807, France confirmed its military control of mainland Europe. The Third Coalition was quickly overwhelmed in 1806 and 1807. Austria was defeated at Ulm and Austerlitz in October and December 1805 respectively and in January 1806 Austria made peace at Pressburg. Prussia, which had remained neutral in 1805, attempted to take on France single-handed and was defeated at Jena in October 1806; Russia, after its defeat at Friedland, made peace at Tilsit in 1807. Britain once again stood alone.

With the prospect of successful invasion receding as a means of defeating Britain, Napoleon turned to economic warfare. The Berlin Decree (November 1807) threatened to close all Europe to British trade. This was not new. Both Pitt and the Directory had issued decrees aimed at dislocating enemy trade and food imports. The difference between Napoleon’s continental system and the attempts in the 1790s was one of scale. Between 1807 and 1812, France’s unprecedented control of mainland Europe meant that British shipping could be excluded from the continent. In practice, however, there were major flaws in Napoleon’s policy. It was impossible to seal off Europe completely from British shipping. Parts of the Baltic and Portugal remained open and in 1810 Russian ports were reopened to British commerce. In the face of French agricultural interests, Napoleon did not ban the export of wines and brandies to Britain and during the harvest shortages of 1808-1810, he allowed the export of French and German wheat under license. Most importantly, he had no control over Britain’s trade with the rest of the world and it was to this that Britain increasingly looked. Though the Continental System and particularly Britain’s Orders in Council were blamed for economic crisis in 1811-1812 by both manufacturers and the Whigs, it has been suggested that a better explanation can be found in industrial overproduction and speculation in untried world markets. Napoleon failed to achieve an economic stranglehold because he did not have naval supremacy and because Britain’s economic expansion was directed at non-European markets. The British blockade inflicted far more harm on France, whose customs receipts fell by 80 per cent between 1807 and 1809 than exclusion from Europe ever did to Britain.

The British response to the creation of the Continental System came in the form of Orders in Council. In January 1807, the ‘Ministry of all the Talents’ banned any sea borne trade between ports under French control from which British shipping was excluded. To avoid unduly antagonising the United States trade by neutral shipping from the New World to French-controlled ports was unaffected. The Portland ministry took a harder line. Under pressure from Spencer Perceval, the Chancellor of the Exchequer far more strict Orders were issued in November and December 1807. This extended exclusion to all shipping from French-controlled ports, paying transit duties in the process. The major purpose of the Orders was to dislocate European commerce and as a result create discontent with the Napoleonic regime. Success was achieved at the cost of further deterioration in relations with the United States. Demand for British goods meant that trade was largely uninterrupted until America passed a Non-Importation Act in 1811. British exports to her largest single market plummeted from £7.8 million in 1810 to £1.4 million in 1811. There was a corresponding reduction in imports of raw cotton, which was 45 per cent lower in 1812-1814 than in 1809-1811. The Anglo-American war of 1812-1814 was fought largely about the Great Lakes, since the primary objective of the American ‘hawks’ was the conquest of Upper Canada. The New England states opposed the war vigorously and had the Orders in Council been withdrawn a few weeks earlier it would probably not have been approved by Congress. Little was achieved militarily and the most famous incident of the war, the repulse of a British attack on New Orleans, was fought a month after the war ended but before news of the Peace of Ghent reached America. The peace settled nothing. None of the original causes of the war, for example, the boundaries between the United States and Canada or maritime rights, received any mention.

The final phase of the war began in 1808 when Napoleon attempted to exchange influences for domination in the Iberian Peninsula. Nationalist risings in Spain against the installation of Napoleon’s brother Joseph as king and anti-French hostility in Portugal, which had been annexed the previous autumn, prompted Castlereagh, Secretary of War for the Colonies, to send 15,000 troops in support. This approach conformed to the strategy used since 1793 of offering limited armed support to the opponents of France. In the next five years, British troops, at no time more than 60,000 strong, led by Arthur Wellesley (created Viscount Wel­lington in 1809) and his Portuguese and Spanish allies fought a tenacious war with limited resources. Wellington’s victory at Vimeiro in August 1808 was followed by the Convention of Cintra, negotiated by his superior, which repatriated the French troops and set Portugal free. By the time, Wellington returned to the Peninsula in April 1809, it seemed that this campaign was to be no more successful than the Walcheren expedition to the Low Countries was to prove later that year. 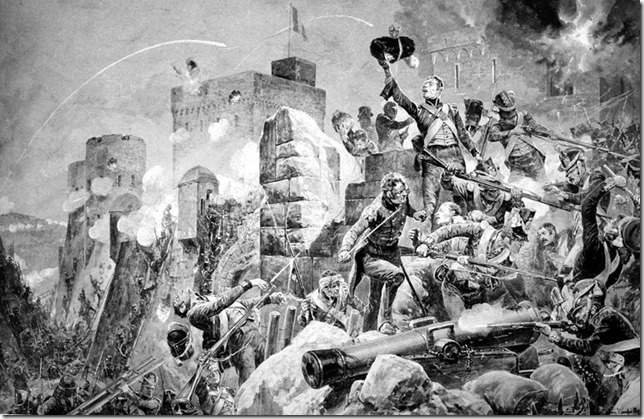 The Peninsula campaign drained Napoleon’s supply of troops that he had to divert from central Europe. Calling the war the ‘Spanish Ulcer’ was no understatement. Wellington gradually wore down French military power and it was from the Peninsula that France was first invaded when Wellington crossed the Pyrenees after his decisive victory at Vitoria in August 1813. Napoleon’s position in Europe was weakened by the unsuccessful and costly Russian campaign of 1812 and by the spring of 1813, the British government was absorbed in creating a further anti-French coalition. The Treaty of Reichenbach provided subsidies for Prussia and Russia. Separ­ately negotiated treaties, usually under French military duress, had been a major problem of the three previous attempts at concerted allied action. Castlereagh, now foreign secretary, saw keeping the allies together long enough to achieve the total defeat of France as one of his primary objec­tives. Austria was at first unwilling to enter the coalition, fearing the aggressive aspirations of Russia as much as those of France. Castlereagh knew that a general European settlement was impossible without total victory. When he arrived in Basle in February 1814 French troops were everywhere in retreat--Napoleon had been defeated in the three-day ‘Battle of the Nations’ at Leipzig the previous October and Wellington had invaded south-west France--but the allies were no more trusting of each other’s motives. Castlereagh demonstrated his skills as a negotiator and achieved the Treaty of Chaumont in March by which the allies pledged to keep 150,000 men each under arms and not to make a separate peace with France. Napoleon’s abdication and exile to Elba in 1814 allowed Castlereagh to implement his second objective: the redrawing of the map of Europe to satisfy the territorial integrity of all nations, including France. The Congress of Vienna of 1814-1815, within limits, achieved this. Napo­leon’s final flourish in 1815 that ended at Waterloo made no real difference. 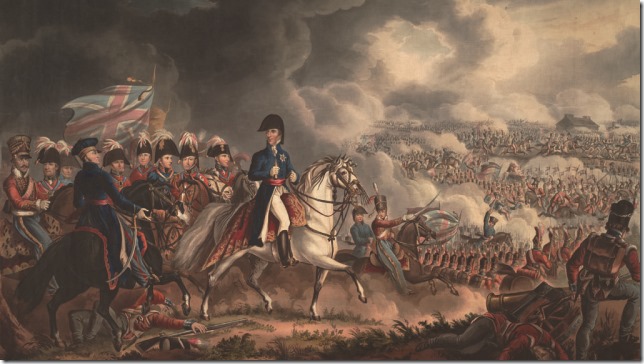 Posted by Richard Brown at 16:02 No comments: