Before Chartism: Exclusion and Resistance

'An accessible and illuminating study based on an impressive range of reading and with footnotes which in effect provide a critical bibliographical guide to the most relevant... sources, which enhances the utility of the book for students at all levels seeking to engage with the vast literature on Chartism and its antecedents which shows not signs of diminishing. The book is well structured and clearly signposted by headings and sub-headings which are always fresh and entirely fit for purpose, e.g. ‘politics of the Excluded’, ‘Rebellions of the Belly’ etc. The index entries are clearly differentiated. Bibliographical references are invariably balanced and informative, for example, the balanced references to the sources for the life of Robert Peel. Hitherto neglected texts are utilised such as R.I. Moore’s Sir Charles Wood’s Indian Policy which reinforces Brown’s facility for discussing themes in a broad global context...It is also refreshing to see such a strong emphasis on regional and local studies in a work of synthesis of this kind...' Dr John A Hargreaves

Chartism was the largest working-class political movement in modern British history.  Its branches ranged from the Scottish Highlands to northern France and from Dublin to Colchester.  Its meetings drew massive crowds: 300,000 at Kersal Moor and perhaps as many as half a million at Hartshead Moor in 1839.  The National Petition in 1842 claimed 3.3 million signatures, a third of the adult population of Britain.  At its peak, the Northern Star sold around 50,000 copies a week, more than The Times.  This was a national mass movement of unprecedented scale and intensity that was more than simply a political campaign but the expression of a new and dynamic form of working-class culture.  Across Britain, there were Chartist concerts, amateur dramatics and dances, Chartist schools and cooperatives and Chartist churches that assaulted the political hegemony of the wealthy, the conservative and the liberal.  For over a decade, Chartists led a campaign for the franchise with a mass enthusiasm that has never been imitated. 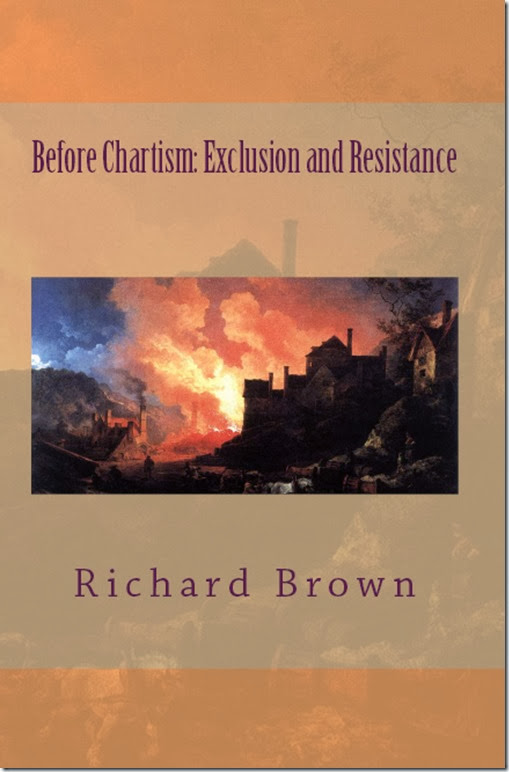 Before Chartism: Exclusion and Resistance acts as a preamble to the four volumes in the Reconsidering Chartism series and seeks to summarise current thinking.  The prologue examines the nature of economic networks in the late-eighteenth and early-nineteenth century. The first chapter explores the ways in which society changed in the decades leading up to the beginnings of Chartism and confronts the central issue of how far society was a class-based. Chapter 2 considers the radical legacy from the 1790s to the collapse of the Whig government in 1841 and surveys key questions such as the ways in which working people responded to economic change.  Chapter 3 looks at the ways in which working- and middle-class radicals confronting the question of reform from the 1790s through to 1830. The importance of the radical press and the ‘war of the unstamped’ is explored in Chapter 4.  The politics of inclusion and exclusion and the role of repression by the Whig governments in the 1830s is examined in Chapter 5 while the dilemma faced by radicals provides a short conclusion to the book.