It was the concentration of people in the burgeoning towns and cities of manufacturing Britain in the eighteenth and nineteenth centuries that led to a growing housing crisis.[1] The inflow of population to towns before 1830 was accommodated both by massive new buildings and the subdivision and change of use in existing buildings. Many separate builders and developers provided new building in a variety of different ways and there was no shortage of building land in and around towns.

The landowner was not generally the builder, though small infill developments in gardens and yards could be carried out by the original owner. Usually land was sold to a middleman or developer who would finance and organise the building process. Landowners included municipal corporations, as for example in Liverpool and Newcastle; charities, schools and churches, large private landowners and professional and businessmen with small parcels of land. Developers could include local merchants, tradesmen, professional men (especially lawyers) and builders who would raise capital locally to finance house construction. Land was conveyed freehold in perhaps half of all sales, or through a building lease. Urban house building before 1830 took many forms. Most cities had some grand housing for the rich and leisured classes, perhaps best typified by the sweeping terraces built by John Wood in Bath and the development of Edinburgh’s New Town from the 1750s. Artisans’ housing ranged from substantial terraced houses to small courts. In Birmingham a relatively affluent skilled craftsman might live in a two or three storey house with two rooms on each floor with an associated yard and workshop. It would cost up to £200 to buy in 1800 and would be rented for at least £8 per year. Only a minority of workers could afford such rents and many houses were multi-occupied by 1830. From the 1770s, rows of back-to-back houses were being constructed costing £60 to buy but could be rented for less that £5 a year.

However, as pressure on space increased many of these were also multi-occupied. Some of the worst housing conditions in 1830 were found in London where population pressures and constraints on space were far more acute than in provincial towns. Working-class families generally lived in a single room or cellar without proper sanitation or water supply and paid 2-3 shillings per week rent. Lodging houses were also common in London, and in the poorest districts as many as 15 people would sleep in one room, each paying 1 or 2 pence for a night’s shelter.[2] 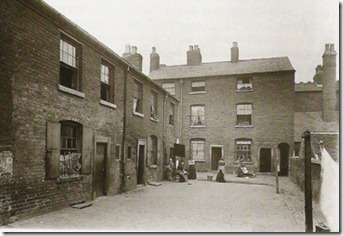 It is hard to compare rural and urban housing conditions. Contemporary descriptions tend to focus on the horrors of urban living experienced by the very poor, but the situation was little different for the rural poor. The main difference was in the density of urban living. Living literally on top of or beneath neighbours in a multi-occupied tenement was a new experience for many requiring considerable adjustments in lifestyles and daily routine.

Victorian cities were in a state of constant social flux. Many residents in all large cities were migrants but they often did not stay long in one place: 45-55% of urban populations either died or moved from a town within ten years. Most housing throughout the period 1830 to 1914 was rented and owner-occupancy rarely accounted for more than 10% of the housing stock before 1918.[3]   Rented accommodation came in a vast array of types. In central areas most of provided through the construction of purpose-built working-class housing or was in large multi-occupied dwellings filtered down from the middle-classes that had moved to suburban villas or more spacious town houses. From 1850, terraced suburbs increasingly housed the skilled working-class. For those on low incomes, rent levels were crucial to housing availability. Although cheap housing had been built in many cities in the early nineteenth century, by the 1850s, it was increasingly difficult to built new housing to rent at much below 5s per week, well beyond the means of those on low or irregular incomes. Such families had little option but to rent lodgings or take slum housing in the city centre. Income determined where you lived and construction costs controlled the type of housing that was built in different locations. In such areas as Whitechapel or St Giles in London or dockside areas and commercial districts of Liverpool slum accommodation could be obtained quite easily. Accommodation was confined and relatively expensive; for example a single room 12 feet square could be rented for 1s 6d or more per week in a provincial town and for rather more in London. It could be dirty and facilities were shared with the other tenants.

By 1850, construction of new housing in the central areas of towns had almost ceased, but lower-density terraced housing was expanding rapidly in new residential suburbs of all English and Welsh towns. In Scotland tenement construction continued to be the norm. A new terraced house with four rooms, its own privy and in-house water supply would probably cost 5-7 shillings per week to rent. Relatively few such properties were multi-occupied, though the family might take in a lodger. Working-class home ownership was feasible only for those with relatively stable incomes in prosperous areas because of repayments of around 10 shillings per month. High levels were found in parts of north east Lancashire, County Durham, the West Riding and South Wales. Housing provided by employers or by philanthropic organisations, like the Peabody Trust in London, was often locally significant but never accommodated more than a few% of the population. 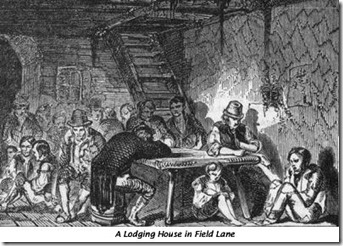 The process of residential decentralisation with the construction of suburban housing estates by private enterprise gathered momentum after 1890. This was most clearly seen in London, but similar processes were operating in all large towns. In 1850 Ilford, for example, was a quite village on the main railway line from London to Ipswich, seven miles from Liverpool Street station. In 1891 there were some 11,000 people in the parish, but by 1901 the new urban district had expanded to 41,240 people and its population almost doubled again by 1911. Two London builders, W.P. Griggs and A.C. Corbett, encouraged by the good railway communication, acquired large areas of land and began to develop massive private housing estates. In 1906 on the Griggs estate a four-room house started at £260; a four-bedroom, double-fronted house at £375 and a five-bedroom house at £450. Both the builders and Ilford Council provided further incentives to move to the suburbs. Corbett gave loans to purchasers to cover some of the cash deposit while Ilford Council used the Small Dwellings Acquisition Act 1899 to give cheap mortgages. Ilford is a classic example of the ways in which improved transport, availability of land, the willingness of entrepreneurs and public bodies to invest and the demand for suburban living combined to restructure the city in the early twentieth century.

In the Housing of the Working-class Act 1890, government intervened in the free market for the first time and, in so doing, fundamentally affected the expansion and planning of towns. Though the provision of council housing was slight before 1919, some councils had begun building houses before 1890 and the Act gave further impetus to such schemes. Some 24,000 council units were built in Britain before 1914 but most were concentrated in London (9,746 units), Liverpool (2,895 units) and Glasgow (2,199 units). These schemes were too few in number to make any real impact on housing needs and, in any case, rent levels and selection procedures tended to exclude the very poor.[4]

There was little fundamental change in housing between 1830 and 1914. Paying rent to private owners remained the norm, accounting for 80% of all houses. Council housing accounted for only 1% in 1914 and housing associations 9%. Though all towns spawned a succession of new residential suburbs, these were mainly for the affluent working and lower-middle-class families who would leave the older parts of the city centre, and new skilled in-migrants. The poor remained trapped in low-cost, sub-standard housing. The spatial segregation of social groups was cleared structured by the economic realities, reflected in income and occupation that controlled access to different types of housing. 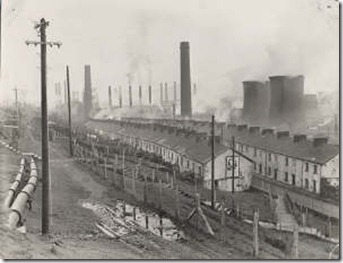